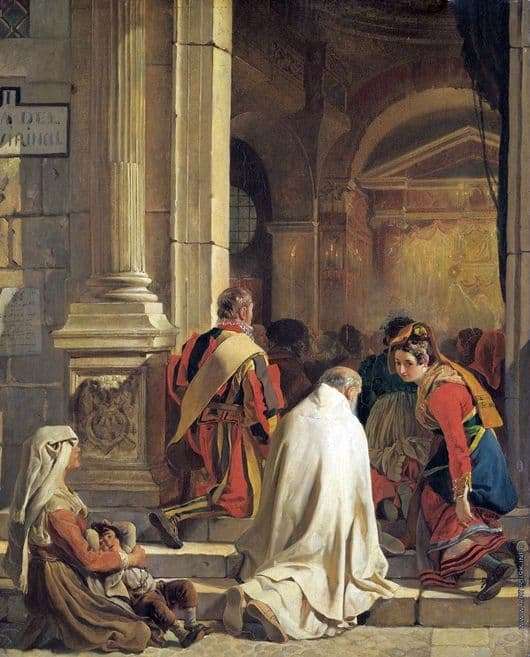 K. Bryullov painted the picture “Vespers” in 1925. This is the time of his becoming an artist, finding his own genre and style. During these years, the artist was impressed by the art of ancient Rome. Visiting Italy, the artist admired her. He painted pictures based on these impressions – vivid and plot. Bryullov was inspired by the history of the great Rome, its art, literature and baroque architecture.

In the painting “Vespers,” Bryullov depicts Christians bending over their knees during an evening service in the temple. In the foreground of the picture, the viewer sees people leaning upon entering the church. At the bottom of the stairs sits a rather poorly dressed woman with a child bursting out of her hands. The kid is not too disposed to listen to sermons and prayers, he is attracted by play and running. Both are dressed in brown clothes, the mother has a hat of light shade on her head. Mother with reverence and interest looks deep into the church.

Further, on the steps above, a venerable gray-haired man in a white robe knelt. A notable Italian in motley blue-and-red clothes is located a step higher. The blush on her cheeks suggests that her thoughts at the moment are not occupied with divine service. At the top of the stairs is a mature man in a striped black and red dress. The figures, painted by the artist, are beautiful, they emanate nobility from them.

It is evident that in front of them in the hall of the temple is a whole crowd of people. They are hidden by shadow, Bryullov does not register them. Also in the foreground of the picture the artist pays attention to the architecture of the temple. He diligently prescribes a column at the entrance to the church and one of the outer walls of the building. In the background of the picture, the viewer sees the interior of the church lit up with a multitude of lit candles.

The painting “Vespers” was written in the genre of neoclassicism. The work is kept in Moscow, in the Tretyakov Gallery.