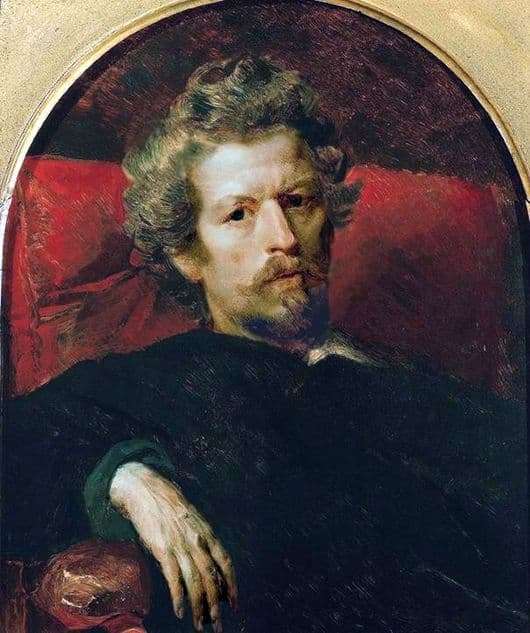 Karl Bryullov was undoubtedly a talented but very lonely artist, therefore he endured the illness alone. For a long seven months, the fifty-year-old artist, on the recommendation of the doctors, did not leave his bed, no one was allowed in, he was absolutely alone in an empty apartment. And on the sunny May day of 1848, when everything was blooming outside the window and the warm breeze blew, the disease finally receded.

The first thing that the artist demanded from the doctor who came to visit him was an easel and paints, with which he began to paint a portrait with amazing speed, his own portrait, which he painted according to contemporaries in just two hours. In this portrait, the whole artist, all his power and talent, which for a long time were hidden for the sake of a long illness, appeared in this picture. The artist depicted himself in a sitting position, his right hand resting powerlessly on a couch made of red cloth. The red color is not accidental here, because besides the fact that he was the most favorite color of the artist, on this canvas he is called upon to create a contrast between the weakened and aging artist and the bright colors of life, which he loved so much.

A pale face, strained eyelids, thin depleted fingertips are all features of Bryulov during this period. The black shirt also shows how tired the person sitting in the chair is, tired of fighting, tired of living, but stubbornly continues to strive to preserve his talent in order to give people some more wonderful works. Sad, intelligent, and all understanding eyes look from a portrait, as if saying goodbye to their audience and to everything that is going back in time. So the artist saw himself, having lived in the world for half a century, and so sees the viewer two centuries later. With this portrait he finishes his life, which he compares to a candle, which burned down in 1952.