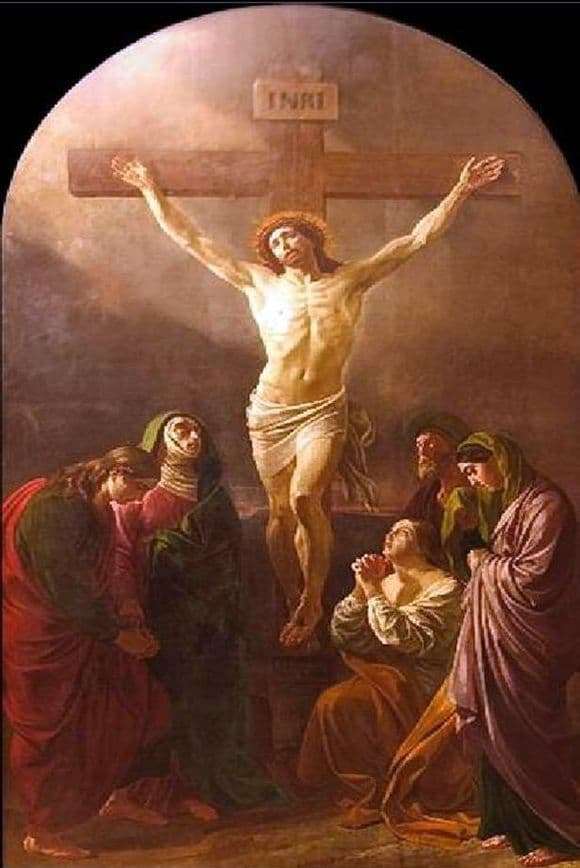 The artist worked on the canvas from 1836 to 1838. The painting was created for the Lutheran cathedral named after Saints Peter and Paul, the creator of which was the brother of the famous author – A. P. Bryullov.

In religious painting, the artist sought to bring the features of real experiences. He wrote plot, rich pictures, full of images and bearing the historical meaning.

The Crucifixion vividly narrates the important episode of the Gospel story – the death penalty of Jesus Christ. Bryullov depicted five figures standing next to the cross on which Jesus was crucified. The expression of their faces and the hands of the worshipers first of all draws the attention of the viewer. The color scheme symbolizes the character of the tragic nature of the work. The sun’s rays falling from above is another sign that speaks of the lightness and holiness of the crucified. On a dark, dim background, the figure rises as if frozen in the air.

Three Mary are depicted – Maria Cleophas, the Virgin Mary, and Mary Magdalene, as well as John the Theologian and Joseph of Arimathea, who suffer and mourn beside Christ crucified on the cross.

There are a great many works of artists of different times and backgrounds who tried to capture this particular episode of the Gospel, but the work of Karl Bryullov is recognized as one of the most magnificent. The author has another graphic work with the same name, created a few years earlier.

The difference lies in the fact that on it Jesus Christ is depicted in loneliness, a larger plan. It is executed in black and white with Italian pencil on paper, unlike the later version – he also wrote in oil on canvas. Both paintings are kept in Russia: in 1835 – in Moscow in the Tretyakov Gallery, and in 1838 – in St. Petersburg in the Russian Museum.