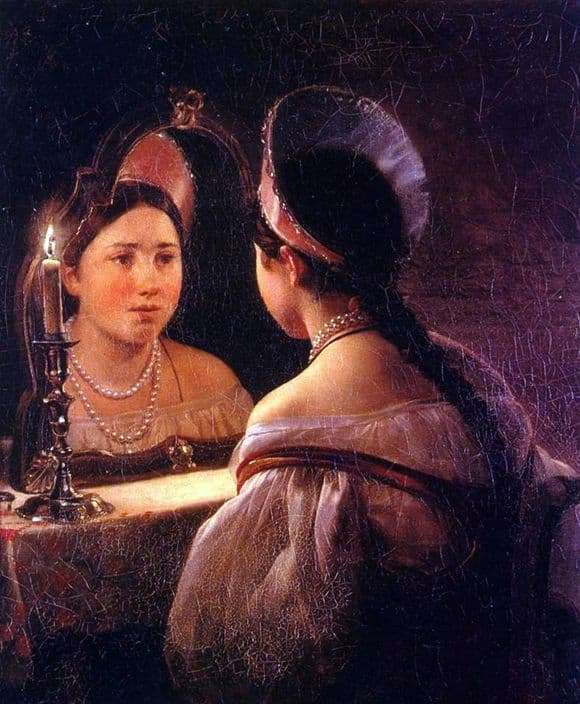 The tradition of Christmas divination is very old. She came from paganism that prevailed in ancient Russia before Prince Vladimir baptized her. And even after baptism, superstitions did not go anywhere, just merged with the new faith and established themselves so firmly as the new faith alone would never have been fixed.

There is a fortune-telling at Christmastime, which is considered very scary and at the same time very accurate. We need to take two mirrors, large and small. Big set in front of you, put candles on the sides, and, having said the right words, put a small mirror in front of you so that a fiery corridor formed in the depth of the mirrors. A reflection will follow him, gradually approaching, and you need to have time to make out his face and lower the mirror before he comes close. Otherwise, it can strike the face and leave a birthmark, or even drag it away with you.

That is exactly what Svetlana is going to guess. She is wearing an elegant dress, a kokoshnik and pearl beads. She dressed up like a bride – not every day you meet your betrothed, albeit only in reflection – and took off the pectoral cross, which any Orthodox Christian woman should wear without removing. After all, if it is not removed and put in a sock under the left heel, witchcraft will not work. The girl’s face is tense. She looks in her reflection as if she is already trying to see the betrayed man – not yet lifting the mirror, without saying a word.

She must be scared. After all, the caster and destroy the soul, and exposes himself to danger, but curiosity is much stronger than fear. The mirror looks old and surely pulled out of grandma’s chest. The candle in an old candlestick burns evenly and brightly.

And who knows what can happen this night? Maybe the truth will come narrowed, and maybe the horned line will appear and laugh, knocking on the mirror from that side. Together with the girl, the viewer asks this question and involuntarily begins to get nervous.