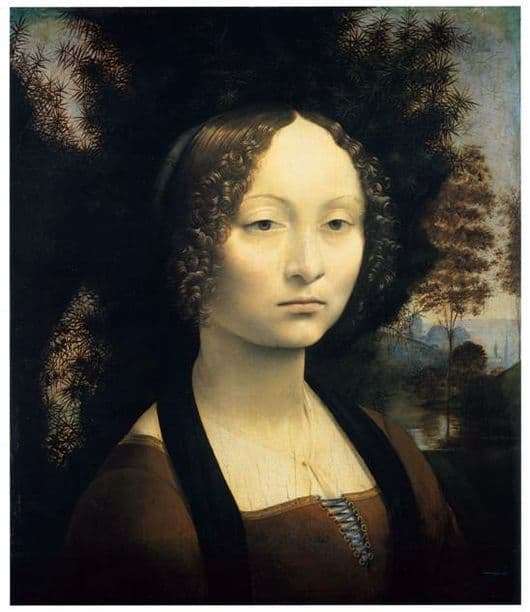 The work of Leonardo Da Vinci “Portrait of Ginevra de Benchi” refers to the early work of the artist. The artist often painted women, this is one of the distinguishing features of his work. In addition, the facial features are drawn so clearly and vividly that it is not at all difficult to guess the model’s thoughts and feelings.

The same applies to this picture. It depicts Ginevra d’Amerigo de Benchi, poet of Florence late XV century. According to researchers and experts, perhaps this is one of the first psychological portraits of the time, in which the mood of sadness is especially pronounced. By assumption, this is due to the fact that the girl not so long ago experienced a separation from the Venetian ambassador Bernardo Bembo. This feeling is especially emphasized by the play of light and shadows, which Leonardo da Vinci masterly performed. The emphasis is on the girl’s pale face, her eyes and wide cheekbones, which stand out in particular against the dark background of the landscape, which is depicted in the background.

The sadness of the girl is further emphasized by the slightly blurred contours of her body – this is a special technique that is called sfumato. Leonardo Da Vinci introduced a sufficient number of innovations in the technique of fine art and in this picture he also applied something that is not entirely characteristic of Italian portraits of the Renaissance. Thus, Ginevra’s face is turned to the right, not to the left, as was typical of the traditions of portrait art. Disputes experts do not subside to this day about this picture.

Some of them believe that the portrait of Ginevra is circumcised, that is, the girl must still have her hands visible. This is related to the thesis of Leonardo, in which he wrote, that people are best portrayed with hands, because they most fully characterize the state of a person and his inner world. In addition, in the collection of the Windsor Castle there is a preserved drawing, which depicts women’s hands, the proportions of which surprisingly correspond to the portrait of Ginevra. Who knows, maybe this is the continuation of the picture.