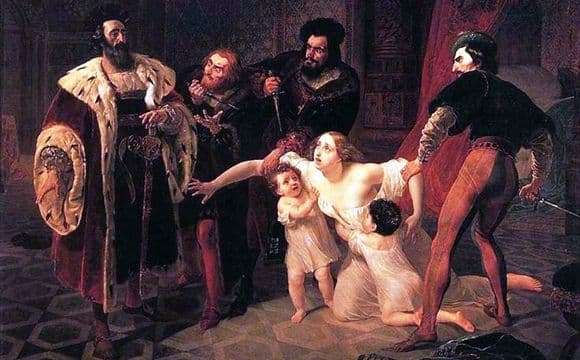 In 1841, Karl Bryullov created one of his most famous paintings, The Death of Inessa de Castro. The work is a typical representative of the style of romanticism. The canvas is made on canvas with oil. The plot is based on real historical events.

The main heroine of the picture is a young woman, a representative of a noble family, the daughter of PF. de castro. Inessa was famous for her beauty. Thanks to the natural external data, it did not go unnoticed at the court. At first she became the mistress of the heir to King Alfons the Fourth. After the king’s son was a widow, the beautiful woman became his secret wife. However, evil tongues told the secret of lovers to the ruler. The young man did not dare to confess to his father in what he had done, but he refused to enter into marriage with a noble lady. It was decided to kill Inessa.

The sentence was carried out personally by King Alfons the Fourth. In the absence of his son, he went to the girl, but was discouraged by her plea for mercy. In addition, the unfortunate had two small children. Later the assassination of the king committed the murder. Entering the throne, the heir decided to avenge the death of his beloved woman. Counselors were forced to go on the run, but were soon found and executed. A couple of years later, the ruler ordered Inessa to be removed from the grave and seated on the throne. After a while the girl was re-buried.

The masterpiece bears the imprint of tragedy, bears in itself the bitterness of lost love. This story has repeatedly inspired the creators to create their works.