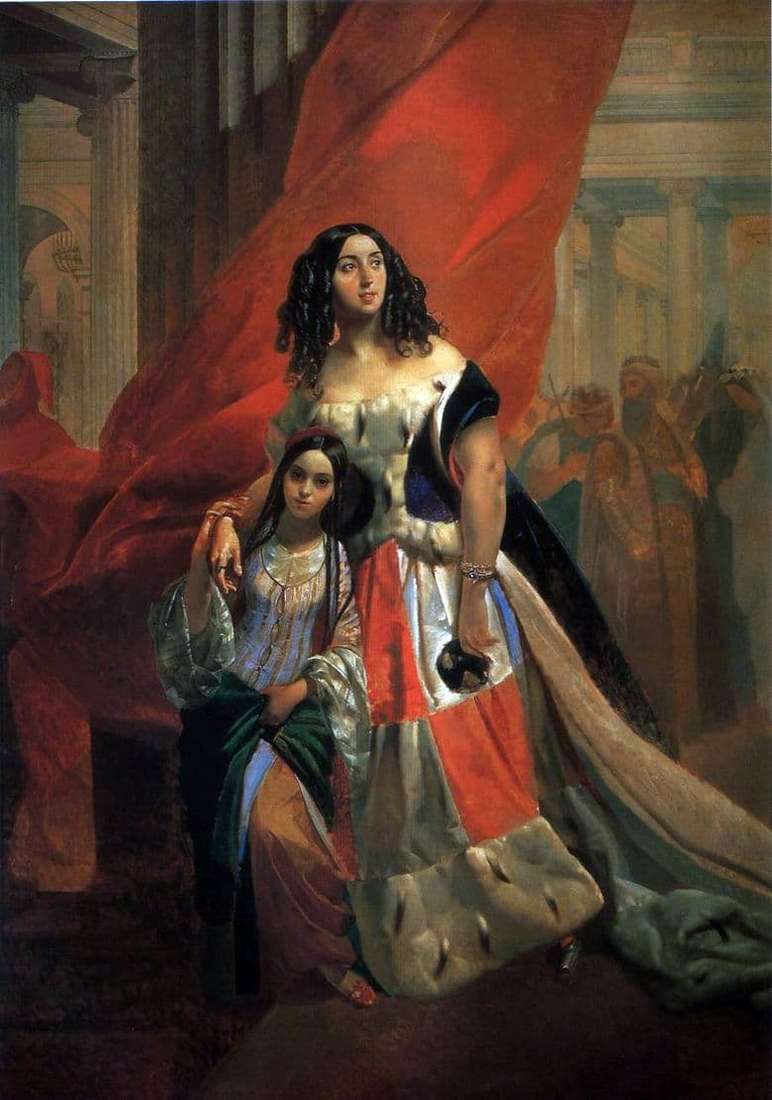 Karl Bryullov was the son of a sculptor and showed talent for drawing at an early age. He was an adherent of romanticism – but unlike Western romanticism, where harmony, beauty and a positive attitude towards the world triumph, late Russian romanticism was manifested by tragic intonations and a general feeling of the tragedy of life. Also, Russian romanticism has an interest in strong feelings and emotions that manifest themselves in peak moments and situations. In this case, drama is inevitable in describing unusual topics. The artist successfully combined all these signs of the genre with his classically perfect faces and the plasticity of his characters. In addition to major genre works, Bryullov created a large number of portraits, both famous figures of Russian culture, and his friends and acquaintances. In addition to oil painting, he successfully wrote in watercolor.

Yulia Pavlovna Samoilova was a close friend of Briullova; rumor attributed to them a love affair. Independent, educated and unpredictable, Yulia Pavlovna has experienced many fleeting romances; she did not need money and life was truly brilliant. The beloved did not encroach on each other’s privacy and met with others in parallel. Karl often painted his girlfriend, and not only on those portraits that bear her name. For example, on his epochal canvas “The Last Day of Pompeii” Julia is shown three times – fearfully holding two daughters (Paccini foster girls) to her, fallen to the ground, with luxurious forms, and with an earthenware jug next to the artist himself, who is saving objects from red-hot lava cultural values.

“Portrait of Countess Samoilova” – one of the iconic works of the artist, which at one time created a sensation in Italy, where it was written. In the picture we see a brilliant, secular lady, victoriously beautiful, proud, dressed in a luxurious fancy dress. Running away from a holiday, the beauty stopped for a moment, having thrown off a mask. Between Samoilova and the hall from which she had just left, the scarlet curtain was lowered, as if separating the heroine from the high society, opposing him.

The figures of the guests of the ball are blurred behind as if in a cigarette smoke, seem faded and unimportant. The artist admires a courageous, free woman who challenged the foundations of society and lived as she herself wanted. On Julia’s fancy dress – bright highlights, the intensity of the colors of the portrait is close to the “Last Day of Pompeii”. The abundance of red color, in all its shades – from dark-purple and blood-scarlet to delicate pink, is a characteristic feature of the picture. The second leading color is white; bluish on the smooth satin of the dress and warm, golden in the image of the softness of ermine fur. Samoilova’s pupil, Amalia Pachchini, gently clung to her adoptive mother, she was pensive and a little sad. It seems that what is happening at the ball is not pleased, and even slightly frightened the girl.