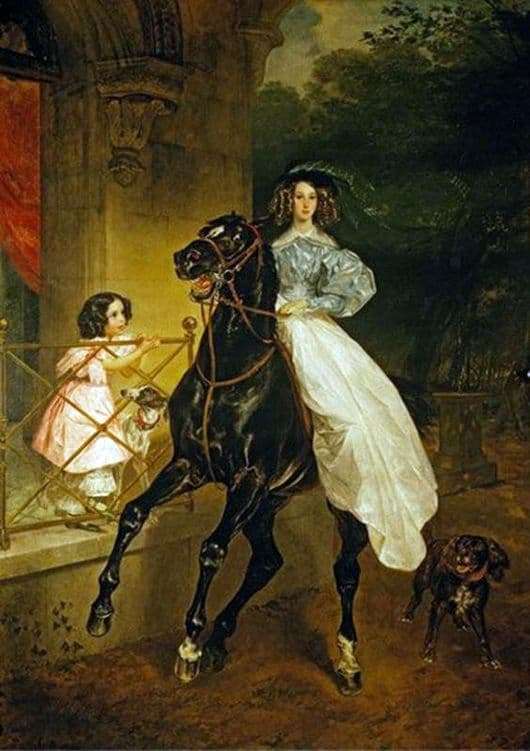 The Horsewoman is a painting by the Russian artist Karl Bryullov, written in 1832 at the request of Countess Julia Samoilova. Even on the dog’s collar, the artist depicted the name of the Samoilovs. For the first time the picture was exhibited in 1832 in the Brera Gallery in Milan. Next, the canvas was at the very Countess before her ruin in 1972, when the painting was sold.

In 1896, the “Horsewoman” was acquired for the Tretyakov Gallery. At first it was assumed that the canvas was depicted by the countess in person, but art historians, having studied the later Bryullov paintings, were able to prove that this was not the case. The painting depicts Dzhovanina and Amalicia Pacini – pupils of Countess Julia Samoilova. The artist called his painting “Jovanin on a horse.” In Italy, there are engravings of this picture, which are considered a portrait of the singer Malibran, which is quite famous and is the sister of Pauline Viardot.

The picture conveys the scene of the walk. The moment of returning home is captured when Jovanin arrives at the porch riding a black horse. Bryullov’s composition “Horsewoman” is filled with dynamism – everything in it is in motion, stopped for just a second, so that the artist could capture. A black horse beats its hoof, hot from a walk, and the dog, with a collar of its own, rushes under his hoofs, joyfully meeting Jovain. The canvas also depicts a small half-sister Jovanin – Amalie. She is dressed in a pink dress and green shoes. But most of all, her enthusiastic gaze, as she looks at her half-sister, Jovain, draws attention.

The picture is full of joy from meeting after a short, but still absence. From observing it, the spirit fades and the viewer as if plunges into this joyful atmosphere depicted on the canvas of the Russian artist Karl Bryullov, who could so sincerely and honestly convey the atmosphere that reigned at that time on the estate of the Countess.