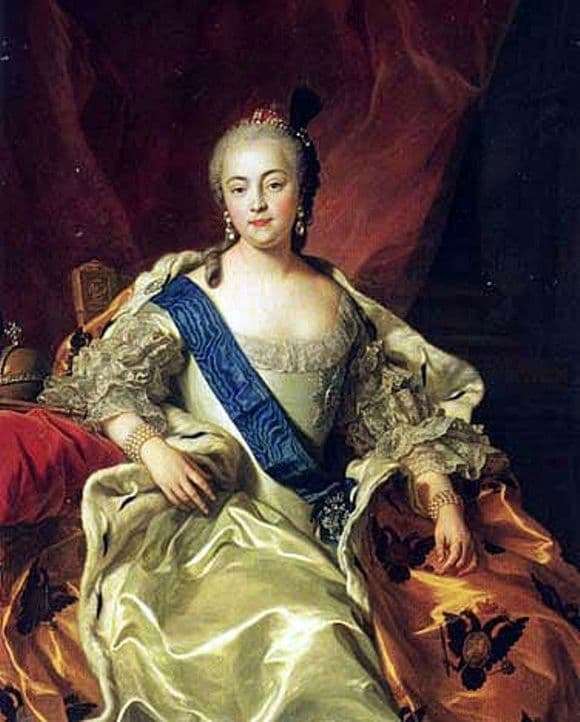 Van Loo – a bright representative of the dynasty of painters, held a high position at the court and had fame. He studied painting with his father and realistically could convey not just the aesthetic part of the character, but also the character.

Elizabeth was a tough and even rude man; the empress came to the throne as a result of a coup d’état. She suspected everyone in her disarray and conspiracies throughout her rule.

The period of stay on the throne of Elizabeth was a time of luxury and spending, completely unfounded. She was surrounded by many favorites who built palaces painted with gold leaf.

The ruler did not skimp on titles for her fans. The portrait displays the Empress as a trendsetter, which she was.

On the canvas depicted Elizoveta with the ribbon of the monarch, in jewelry. The Empress loved the decorations. The mantle lined with fur is embroidered with the coat of arms of Russia. The attributes of power are located behind the right shoulder, yet despite her status, she is more of a woman in this portrait than a monarch.

A beautiful dress of expensive brocade with lace sleeves adorns the empress. The color of the dress makes the figure of Elizabeth brighter, and the dark background only favorably emphasizes the queen. The artist depicted the ruler as a symbol of Russia, she sits surrounded by the emblem of the country.

One gets the feeling that the empress put off the attributes of power and decided to stay just a beautiful woman, but the cloak reminds of her status. The canvas depicts a secular woman, dressed in the latest fashion and taste. By her jewels you can determine her status.

The hairstyle is decorated with a luxurious tiara, the hair is styled in a fashionable hairstyle. It is evident that a woman simply flaunts. The painter opened in the steel ruler a real woman, gentle, sweet, with a cheerful look, so she was real when the symbols of power were put aside.