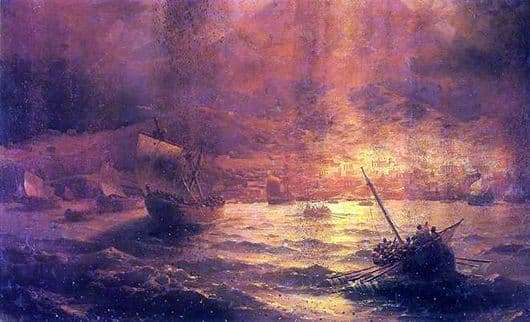 Once upon a time there was a beautiful settlement – Pompeii – which was destined once to disappear from the face of the earth, to be buried under the ashes of Vesuvius. We are familiar with this story mainly due to its picturesque embodiment on the canvases of Karl Bryullov.

The artist depicted people locked up in the city, who are striving at all costs to save themselves. And in order to convey the horror and confusion of the inhabitants of Pompeii, Bryullov pays special attention to the drawing of their faces.

However, few people know that not only he, but also Aivazovsky, addressed the topic of the demise of Pompeii. In 1889, he wrote a canvas with almost the same name – “The Death of Pompeii”. Apparently, this decision was not without the influence of Bryullov, to whom the artist had friendly feelings.

At the same time, Aivazovsky cannot be blamed for blindly imitating a sample: being a marine painter by nature, he is also very uncharacteristically in this picture, concentrating his attention on the sea. It is written in piercing scarlet, brown-yellow tones, which, according to the master’s plan, should symbolize all human lives lost under lava.

Such a palette very well reflects the main mood of the picture – unlimited horror. At the same time, Aivazovsky, as often happens, leaves his characters the hope of salvation.

In the “Death of Pompeii” this is manifested in the image of the ships departing from the place of the terrible death. If you look closely, then on the canvas you can see the culprit of all troubles – the volcano of Vesuvius, spewing lava flows on the beautiful antique houses. The artist greatly enhances the effect of presence by spilling black dots of ash over the picture, which is deposited in the water.

The painting is kept in the Rostov Regional Museum of Fine Arts. If possible, you can always visit it in order to see firsthand the “Death of Pompeii” and some other masterpieces of Aivazovsky.