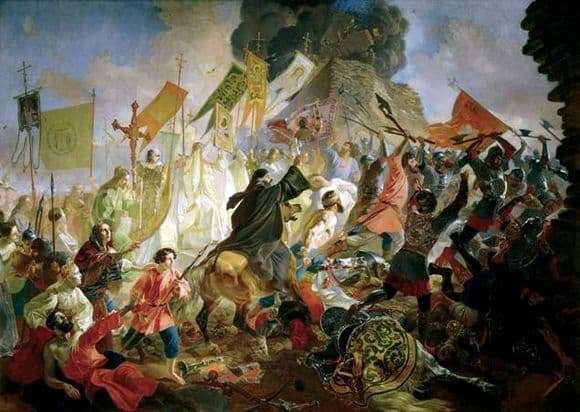 Karl Bryullov set about creating the canvas “The Siege of Pskov” after he received the position of the head of the history class, but, at the Emperor’s Art Academy, he was awarded only 2 professors. For assignment of 1 degree or position of a senior professor, Bryullov’s task was to write a big picture on the subject given by the academy.

The artist took the real historical events of the Livonian war as the basis for the plot of his large canvas. When in 1581 the city of Pskov was under the siege of soldiers of the Poles. These bloody events claimed many lives, both residents of Pskov and the attacking side.

The picture depicts a crucial moment of the battle, when the wall of the fortress explodes, and the defender of Pskov, Shuisky and Abbot Tikhon, prevent the retreat of urban soldiers from the battlefield. Over the heads of the procession of people images of icons develop, and in their hands they carry crosses and holy relics. Around them reigns destruction and fierce struggle. The land is covered with wounded and dead people, their horses. The smoke draws in the blue sky, from the tower it goes in big black clubs. But, making its way through the battlefield, the procession is lit by bright sunshine, as a symbol of the fact that victory will be on the side of Light.

The beginning of work on the creation of this canvas was in 1839. But Karl Bryullov, in the opinion of many, could not bring his idea to life. The sketch of the picture seemed to the artist expressive and exciting. As if a kind of divine army brings salvation to people, driving away enemies. But critics felt that the composition of the painting was not correctly composed, as a result of which not all the main actions are captured within the canvas.

Due to negative reviews and the enormous scope of work, Bryullov finally lost interest in it. When the artist died, his picture was never written to the end.