Home ⇒ 🎨Brullov Karl ⇒ Description of the painting by Karl Bryullov “Portrait of A. K. Tolstoy in his youth” 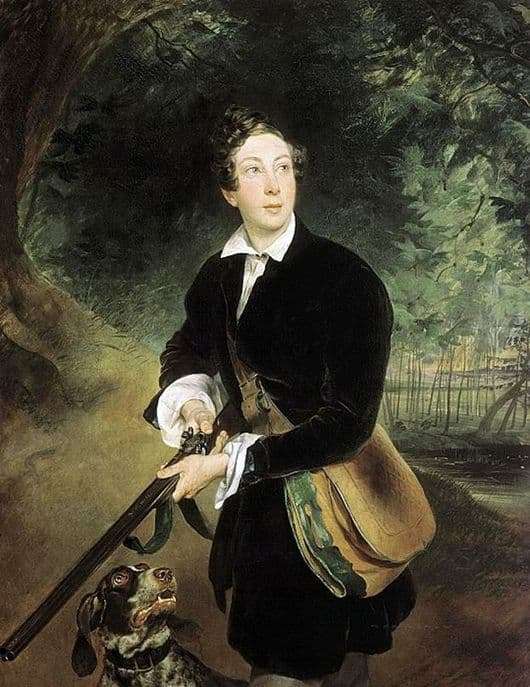 The whole aristocracy of the 18th century, was passionately keen on hunting. It was a kind of fun that distracted from everyday thoughts. And then at that time there were a lot of all kinds of beasts that could be knocked out. Count Alexei Tolstoy was clearly no exception. And this despite the fact that he was not only great hunted, but also owned a pen.

On the canvas is the very Alexei Tolstoy, who will soon give Russia several masterpieces at once, and among them, the Prince of Silver. And on the canvas, he is still young and careless, and yet he doesn’t know that he will have a long life. Alas, the talented do not live long.

In the meantime, before us is a young man who went hunting. Bag, gun and of course the dog, all with him. And most importantly in the eyes of passion. But here’s some kind of affectionate face and it seems that such a gentleman couldn’t even shoot an ant… But how often did it happen that appearance was deceptive. And Tolstoy was a passionate hunter. Exactly like a great writer

But still looks largely lost. Gentle hands, gentle face, only a look is a little ironic. And so you can see from the portrait that he is ready to catch his luck, his game.

Excitement, apparently was inherent in this man. How else? It’s a pity that this man managed to do so little. Who knows, maybe he could become a great writer or a poet. Although so left a very noticeable mark in Russian literature.

But Bryullov kept us this wonderful person just like that, and thanks to the artist we remember him and so young. There are more portraits of Alexei Tolstoy, but this one seems to be his best portrait.

What can I say to understand a person you need not only to see him. But read what he wrote. And he wrote remarkably and especially on historical themes, and strangely enough he wrote about the times of Ivan the Terrible.