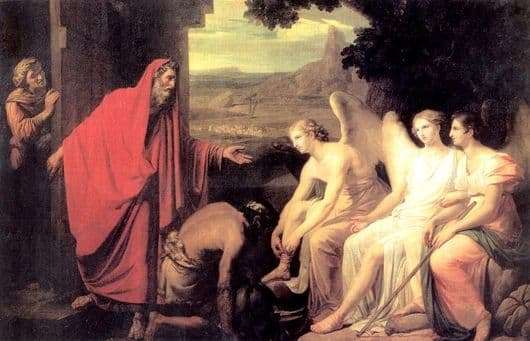 Bryullov Karl Pavlovich in 1821 wrote the painting “The appearance of three angels to Abraham in the oak of Mambre.” The author found a balance point between the creation of a human portrait and an unimaginable landscape.

Abraham turned out magnificent, but a little theatrically simulated. It hangs a red canopy with all sorts of folds. Angels, like tired travelers, who sat down in front of a difficult road. Their images are bright and pure, it is immediately clear that they are celestial beings that do not belong to our sinful world.

The most distant angel attentively listens to the man and at the same time straightens his shoes. But in order to portray such a natural behavior, the artist had to redraw the canvas several times. He had found thousands of sketches, he was looking for perfect poses for each character of his work.

Particular attention is paid to gestures and hand movements and facial expressions. The author studied in detail the plasticity of the body, creating all sorts of sculptures. And all this knowledge he was able to properly attract, creating this canvas. Critics criticize the creator for the theatricality of the ongoing action. But it is only in the first minutes that the gaze falls on the bright attire of Abraham and the impression of unnaturalness appears.

As soon as the gaze is transferred to the three angels, it becomes clear that they are not sitting on the stage, but under the crown of a majestic oak. In the background there are hills and rocks. I would like to take a closer look and examine in more detail every detail and understand what these heavenly messengers think about.

The middle angel is tired of wandering and even holds an auxiliary staff in his hands. Fatigue indicates that angels are no different from humans. They feel pain and can get tired. The wings turn white behind their backs, but they only add weight and complicate movement. This is a living canvas, which is worthy of respect and admiration.