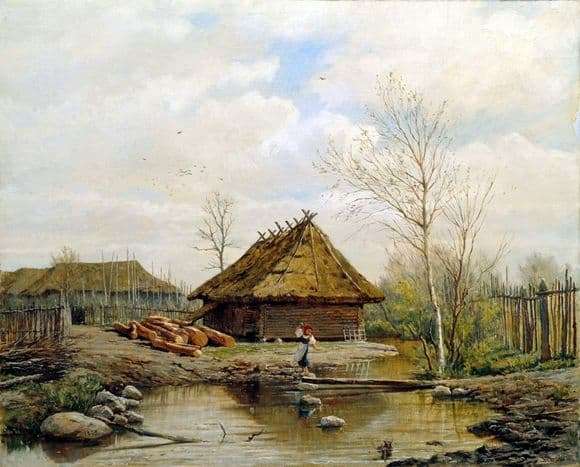 An important place in the work of Pavel Bryullov is occupied by landscapes that the artist wrote in distant places in Russia. The beauty of nature is captured on one of the famous landscape paintings of the artist “Spring” in 1875.

Pavel Bryullov actively began to paint landscapes after his return to Russia. At this time, he shows active participation in traveling exhibitions, gaining popularity and respect from the public, artists. His activity is manifested in the creation of paintings, followed by exposure to the public.

Spring, like most Bryullov’s landscapes, was painted in the style of realism. The artist tried to depict on the canvas what he sees before his eyes. Realism and believability are the two main conditions that Brüllow followed, like other peredvizhniki artists. Bryullov created “Spring”, being sure that art, in particular painting, should look realistic.

Like most of his paintings Bryullov dedicated to the Russian village, so on the canvas “Spring” the viewer sees a hut. The frequent motifs of the artist’s paintings are the peasant houses and the people themselves, which are depicted without a prettier. So in this picture we see a girl who steps from stone to stone along the shore of a small pond.

During his lifetime, the artist was unable to gain recognition from the authorities. But his high level of craftsmanship, which can be appreciated in landscapes, allowed his paintings to be acquired by Tretyakov. “Spring” – one of the valuable acquisitions of a collector, which is exhibited in the Tretyakov Gallery.