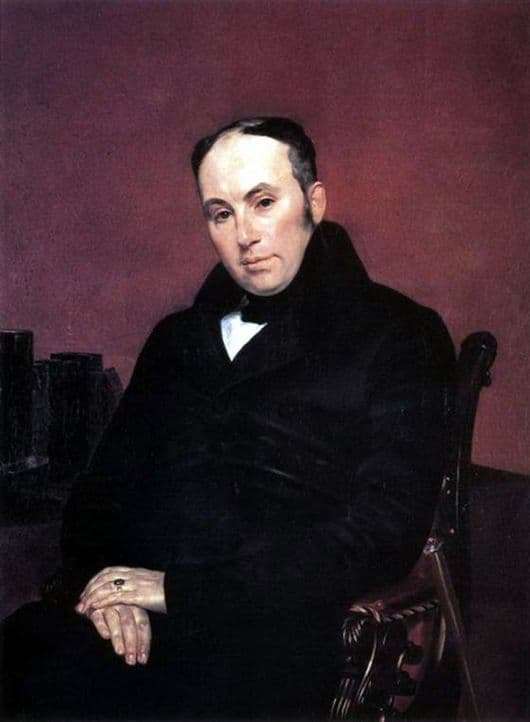 Bryullov rarely turned to portrait painting. But if this happened, his work has always been distinguished by the surprising simplicity of the hero’s presentation.

So on this canvas we are represented by the great Russian poet Zhukovsky. That same Zhukovsky, who shook his contemporaries with the simplicity of a lyre. By the way, much later he will become a personal teacher of children of the Romanov family. But this is a little later than the time when this portrait was painted.

The artist did not come up with a background, but it was necessary to somehow designate the direction of the life of the person he depicted, and it was then that the idea appeared to depict the poet sitting at the table. And here we have Zhukovsky. His face, a little full, fairly concise, calm. And in general, this person breathes than that pacified.

At first glance, you can’t say that this is the ruler of human thoughts and the tutor of royal persons. Although it is precisely this kind of sanity that slips, but no more… There is no pompous display in this position, on the contrary simplicity, calm look, meekly folded hands…

Bryullov according to the stories of his contemporaries, managed to convey precisely the most characteristic features of Zhukovsky – calm, moderation in life, self-confidence. Zhukovsky worked a lot, wrote magnificent poems and was quite fruitful in raising up royal children. And by the way, he did it perfectly: thanks to him and his successful selection of knowledge, at least two emperors received a brilliant elementary education.

Actually, Zhukovsky himself was brilliantly erudite, understood not only Russian literature, but also spoke good English and French, knew the basics of history. And of course there was a way to the literary Olympus of the capital, and there, by the way, even Pushkin was not far away.