Home ⇒ 📌Brullov Karl ⇒ Description of the painting by Karl Bryullov “Portrait of I. A. Krylov” 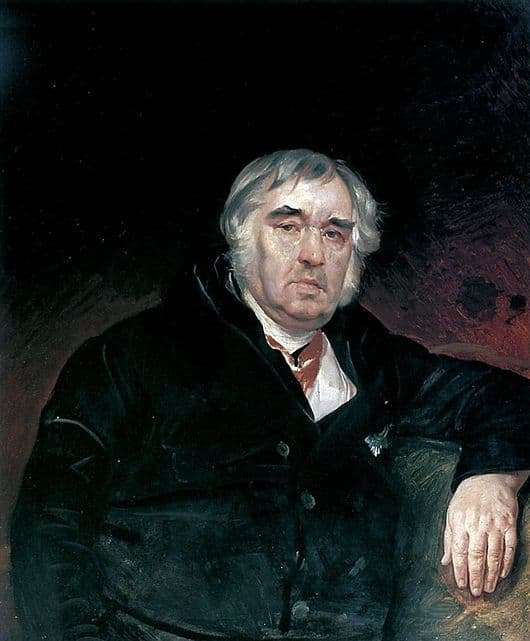 The painter and representative of the classic “watercolor” school Karl Bryullov, made the most beautiful portrait of fabulist I. A. Krylov. At first glance, the portrait impresses with its fulfillment and deep filling of the psychological characteristics and a certain poetic character, which is inherent not only in the epistolary genre, but also in the artistic one. To a large extent, this was all possible thanks to the very image of the writer and his face.

As you can see, Krylov is depicted here in old age or close to this age, his puffy face speaks about it, along with strands of hair that have already managed to sit and randomly descend on the weight and the writer’s forehead. Hanging eyebrows only emphasize the tension of the whole image, hanging in an endless stream of human thoughts.

The suit of the writer is not intended to go out, it is so simple that, most likely, this is his home dress. The same can be said about how he clumsily sits on the writer, obviously not the form of his overweight figure. You can see that the insignia and orders, which are worn on the neck and chest at Krylov, the artist skillfully covered the top of the coat, so the portrait does not look pompous. The only thing that can be seen is the silver glitter of the star, which is half covered. Even the red ribbons of the Annensky and Vladimirsky crosses do not violate the positive impression of the simplicity of the image performed, not blackened by high-profile attributes.

Especially the artist Krylov’s gaze, which is filled with the wisdom inherent in the writer in life, was conveyed in a qualitative manner. Krylov could very elegantly express critical moments of a social nature, hiding them under a veil of humor. It is worth adding that the portrait is incomplete, despite its homogeneity and apparent completeness.