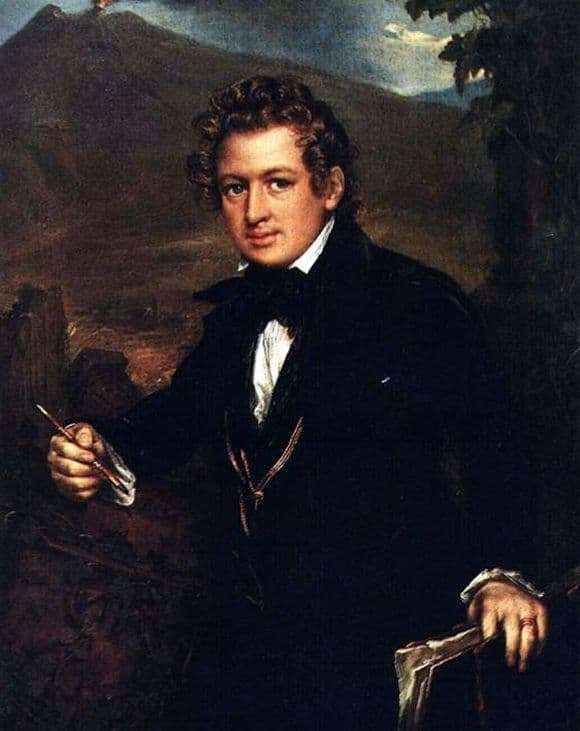 When an artist depicts people who are far from the theory of art, this is customary. But if the master of the brush is brought to work on a portrait of a painter’s colleague – the ability to impress a colleague is worth a lot. Such is the picture of V. A. Tropinin: on it the Russian sculptor of realism and romanticism wrote a ceremonial portrait of K. P. Bryullov.

At the end of 1835, completing the European journey, KarlBryullov calls in the Russian capital. Moscow met her native painter with lush cultural techniques. As for the compatriot and friend of the fascination for fine art – Vasily Tropinin, his fame as an amazing portrait painter went beyond the borders of the country and was already known to our visiting artist.

Having honored local aristocrats and other connoisseurs of art, Bryullov already in 1836 went to meet Tropinin in the creative workshop.

The result of the conversations of two lovers in the painting of hearts was a fruitful friendship. Vasily Andreyevich adopted some artistic skills and techniques that exist in Europe. The main fruit of their partnership is a beautiful canvas – a portrait of K. P. Bryullov.

The artist wrote a colleague in a beautiful suit. A black jacket, a white shirt under it and a tied lush bow are the elegant clothes of the intelligentsia of that time. With the right hand, the figure holds the brush, and the left hand holds the slightly opened folder with the canvases. The master seems to us attentive and always ready to work on the next masterpiece.

The background of the picture takes an antique landscape. This is a kind of echo of the famous Briullov canvas about the death of Pompeii: stone ruins and the flaming summit of a volcano.

Karl Pavlovich looks at the audience with dignity and nobility. The picture reflects the grateful pride of the author for his friendship with such a famous and beautiful painter and involvement in the single work of capturing reality to perpetuate moments.