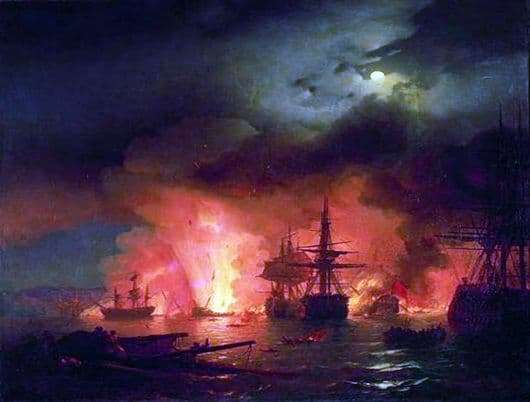 The Chesme battle is a heroic episode in the history of the war between the Turkish and Russian navies, which was throughout 1768-1774. From June 25 to June 26, 1770, at night, Russian ships managed to “lock up” the Turks and crush the enemy fleet. During the battle, 11 Russian sailors were heroically killed, and about 10,000 people were killed by the enemies. This victory is considered unparalleled in the history of the battles of the Russian fleet.

Artist Ivan Aivazovsky, naturally, did not take part in this heroic battle, but painted a unique work of art in which he showed very well the pride and joy of the sailors of the Russian fleet. The canvas was created by the artist in 1848. In this regard, the picture relates to the work of the great marine painter. This is a battle scene, imbued with drama and passionate pathos. The artist on this painting showed brilliant craftsmanship, a unique technique of execution, which for many years he studied at K. P. Bryullov. For the first time looking at the picture, you feel the excitement of brilliant fireworks.

By focusing on the details of the sketch, the plot is clearly complete. The battle, as in history, takes place at night. In the foreground, the artist showed the glorious heroes of the Russian fleet, and in the background are the Turkish ships in flames, which are no longer salvation. Looking closely, you can see a lot of shipwrecks, and on them helpless sailors. Parts of the ship engulfed in smoke and fire that fly off during an explosion, turn into a huge bonfire over the sea waves. The author has created an original combination of the three elements of nature, which together created a tragic firework that fascinates the view. One can see joy and pride in the native fleet, because the painter himself experienced moments of battle during the creation.

Probably, Aivazovsky was the last artist who could so competently present a romantic direction in Russian painting. The canvas “Chesmensky battle” is on the very glorious pages of the history of the fleet of Russia.