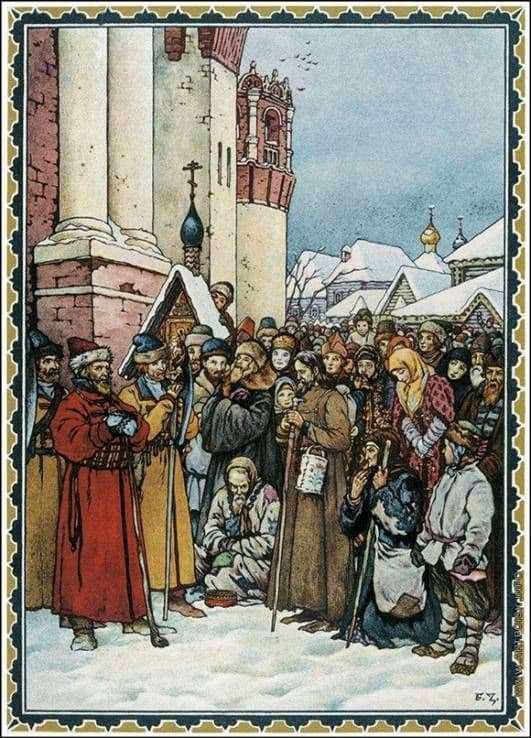 Several dozens of illustrations were written by Russian artist Boris Zworykin to accompany the work “Boris Godunov” by A. Pushkin. The dramatic play of the genius of Russian literature captivated the imagination of the illustrator. Graphic drawings were ready in a century since the writing of the realistic drama of Pushkin. Year of completion of the play – 1825, Zvorykin’s illustrations date back to 1925.

What is remarkable graphic works B. V. Zvorykina? Acquaintance with the play “Boris Godunov” allowed the artist to accurately convey the appearance of the characters, their characteristic features. He depicted the main scenes of the work so that the reader could emotionally immerse himself in the world of the historical past created by Pushkin.

Zvorykin was very interested in the “Russian theme”. He was attracted by folk customs, legends, folklore. Especially admired him, as a true artist, Russian decorative and applied and iconographic art. In the illustrations to the “Boris Godunov” this enthusiasm of the author for folk art is traced. The artist works out in detail the costumes of the heroes, the decor of the rooms, the architecture of Russian cities. He writes the rich decoration of the royal manor: embroidered carpets and tablecloths, gilded candelabra, numerous icons shining with gold. Here he depicts the modest life of the peasants. We can see in these illustrations Russia as it was centuries ago – at the end of the 16th century.

Book illustrations for Boris Godunov were first published in Paris. Now these remarkable works on the historical theme are available to every fan of Pushkin’s work.

Boris Zworykin did not miss anything out of attention. He skillfully depicted architecture – palaces, chambers and temples, as well as a huge number of major and minor characters in the play. The tremendous work of the illustrator is still highly appreciated by critics.