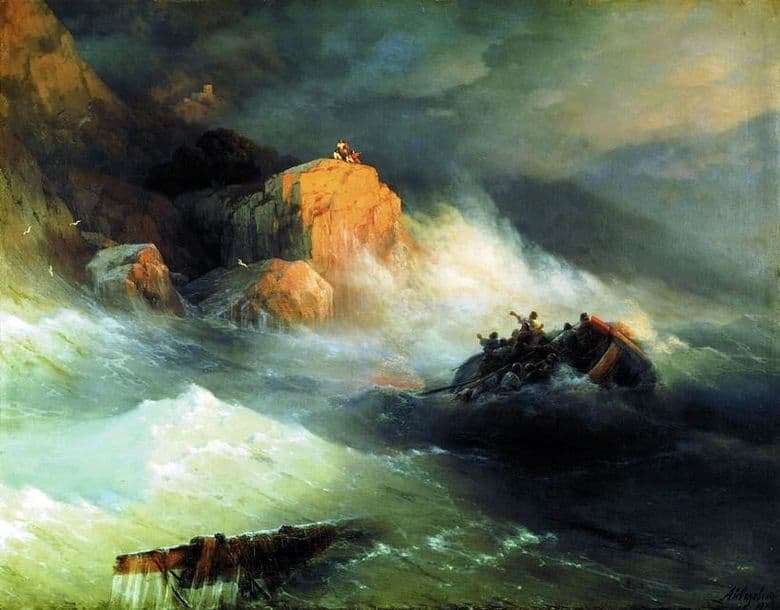 The painting was painted in oil on canvas in 1876. Aivazovsky tried to depict the storming sea as accurately as possible, its beauty, power and greatness. At the same time, he wanted to cause the viewer not the fear of big waves, but the delight of contemplating the limitless possibilities of the element of nature.

The picture shows a strong storm and a small boat, which the waves refer to the rocks. In the boat there are people pointing to the salvific coast. It is not known whether they can land and be saved, or the boat will crash on the rocks. People can be seen on the shore. Standing at the top, they peer into the storm, trying to determine what is there: a wrecked ship or just giant waves.

The main role in the picture is played by the waves with the crests of snow-white foam. They scare and fascinate at the same time. Along the coast, the raging sea acquires a bluish tint, and in the depth – a greenish one. It was during the writing of this picture that Aivazovsky first used the color green cobalt, which he later began to use when creating other canvases.

The sky in the picture is covered with gloomy clouds, which in the background almost merge with the gray-green stormy sea. It was from the sky that Aivazovsky began to paint his paintings, finishing to portray him in one step. But the sea artist could draw in several approaches.

The bright color spot of the composition is a protruding rock with people. It is illuminated by the rays of the sun, making their way through the stormy sky. These warm rays of light symbolize the hope of salvation, a happy ending, which is typical of most of the paintings of the great artist.