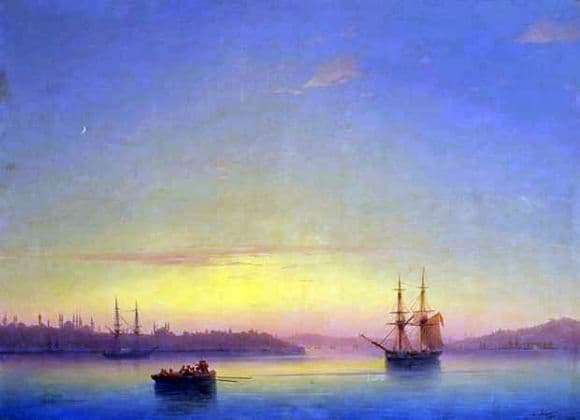 Ivan Konstantinovich Aivazovsky… Is there any other association with this name, except the sea? Everyone knows that Aivazovsky wrote the sea very realistic and beautiful.

Calm, violent, dark and bright, this artist showed us the sea from different sides, at different times of the day, in different countries. The seas and oceans inspired him, and now all of us are inspired by his paintings.

The painting “Constantinople at dawn” was painted in 1851, the work was done in oil on canvas. The picture has an average size of 107 by 145 cm. This picture is called the “pearl” of the marine painter’s works.

The artist depicted a calm sea surface. Dawn. Several ships arrive at the port, the boat sails to the ship. The sun is just waking up, and Constantinople is waking up with it, the outlines of which are visible on the horizon. Constantinople – once the richest, majestic city of the Byzantine Empire. But in this picture Constantinople is visible to us as a quiet, calm city, which is about to wake up.

Aivazovsky represented in his paintings the sea of different colors, from black to sky-blue. But in this picture the sea is yellowish from the sun’s rays. Dawn at the author of the picture is soft pink and peach color. The picture looks so realistic that you might think that this is a photo. So Aivazovsky was able to convey colors. One color smoothly into another. At the same time some fuzzy mixing is not obtained, but beautiful smooth transitions will be obtained.

Aivazovsky’s sky is as beautiful as the sea. On the horizon of this picture you can see how the scarlet sun rises. The sky is lit up with different warm shades. From bright orange to pale pink. The picture is still a little light, because the plot dawn only comes. Therefore, the brightest spot is the center of the picture, where the sun appears.