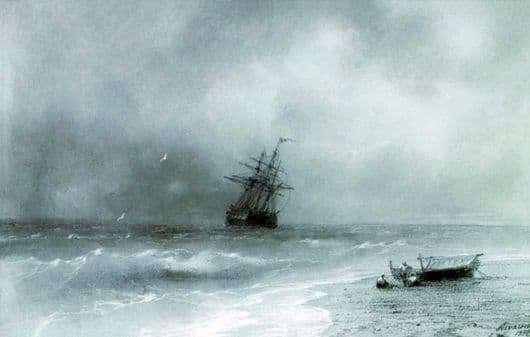 The picture of one of the best marine painters of all times, Ivan Konstantinovich Aivazovsky, “The Stormy Sea” was written in 1844. Despite the fact that all his canvases always surprise and amaze with their naturalness and realism, the artist painted the sea not from life, but in his workshop. He believed that the movement of any element: and water, and lightning and wind – can not be captured immediately with a brush, so a true artist should remember them and always keep them in his memory.

The picture “The Stormy Sea” was also written in the workshop on the photographic memory of the Russian artist, who remembered the peals of the waves on inclement days, as well as with the help of Ivan Konstantinovich Aivazovsky’s well-developed imagination.

On this canvas, the Russian marine painter depicted a ship, all twisted, which could not resist the sea element. On the right in the picture are the sailors, they are preparing the boat and want to help people on the ship to escape from the sea depths that have suddenly caught up with them.

This is already a familiar plot for Aivazovsky, quite often he depicts in his paintings a desperate struggle of man and the elements. All the motifs of his paintings are mostly realistic, so on some canvases the ships die, being lost in the endless sea space.

The palette of paints by Aivazovsky’s painting “The Stormy Sea” is very cold and consists of: white, gray, black and pale blue shades. The sky is completely covered with thunderclouds, it does not have a single white cloud. Aivazovsky deeply comprehended the art of depicting not only the sea, but the air, the movement of clouds.

The sea is raging with all the strength and power, the waves continuously fight against each other, and it seems that a clear warm day will never come. Looking at the picture, there is a feeling of anxiety and fear, the powerlessness of small people in front of the huge, ruthless sea elements.