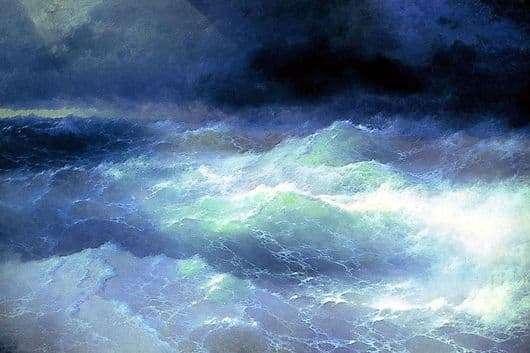 Aivazovsky began a completely new semantic series of his works, in which, and included the work “Wave”. This picture is not significantly different in its ultimate design, but rather has a difference in the new color scheme. But nevertheless, to put it bluntly, this colorful gamut has a rather mean spectrum in color, if not more, practically monochrome.

The storyline, however, just like the composition is quite simple and does not have intricate interweaving. In this case, we can observe, during a winter and rather windy day, the storm is getting stronger because of what a wave is rising, which the painter Ivan Aivazovsky painted on his picture and depicted in his picture. They either break on the sandy shore, or rage in the raging sea of the surf.

The seething water masses do not stop for a minute, and with each new wave they are becoming fiercer, trying in vain to fight with nature.

The second wave comes to replace one wave, and we see in the picture how a rather massive wave rises, which essentially is the very center of the composition, and the rest, rather smaller waves, only feed the main force.

Aivazovsky, begins to use a rather interesting technique to maximize the impression of the rising wave, thus he takes the horizon line far below the usual and we find ourselves at the very base of the wave, which gives us an idea of all its monumental destructive power. At this moment, a heavy, black, leaden sky hangs over the whole sea, which only enhances the effect of the presentation of this picture.

Due to the simultaneous achievement of expressive color gamut and, at the same time, extraordinary simplicity, it gives us a true idea of the power of the raging sea waves.