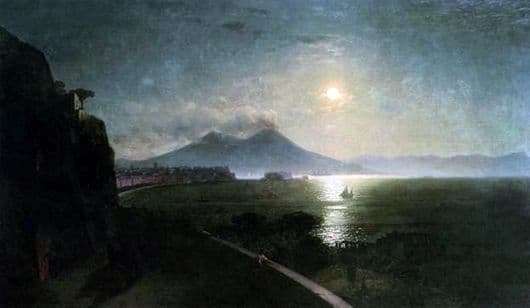 The artist had an incredible bright talent, which gave him the nature. He developed incredibly fast. This was facilitated by the circumstances, as well as the environment in which the future painter grew.

The Black Sea, on the bank of which he lived, brought the most vivid images to his art. In his masterpieces, the sea appeared unbelievably joyful, overflowing with a fabulous shine, sometimes gloomy. It was rarely calm. Most often, stormy waves and even whole shafts of foam, which with violent force and terrifying roar fall on the rocks, cease in front of the spectator. Ships, as if made of shells, become a toy of this lush element.

“Vesuvius” – etude picture. Very often, Aivazovsky could create another masterpiece in just half an hour. An incredible wide panorama of the gulf in Naples appears before the viewer. In the distance we see the coast, which descends to the sea and the already smoking volcano Vesuvius. It seems that the gloomy, but at the same time a transparent haze enveloped everything around. The sun is already setting. The horizon is flooded with a pinkish-golden light. The surface of the sea blue shade truly fabulous. The whole landscape seems magical.

Vesuvius – the main detail of the landscape. This volcano is the only one operating in Europe, its mainland.

This picture creates a rather ambivalent mood. On the one hand, it is just full of dark shades. It seems that the mood should be as hopeless. But at the same time, the landscape is so majestic and grandiose that it leaves a fairly bright impression on the one who watches over him.

Aivazovsky – the true master. It seems that soon we will hear the sound of waves and the roar of the wind. We will not just hear, but even feel the movement of air and the splashing of waves. Such a magnificent image of the nature of Italy can only be done by an artist who is able not only to depict, but also to convey to the audience his attitude to what he saw and embodied on the canvas.