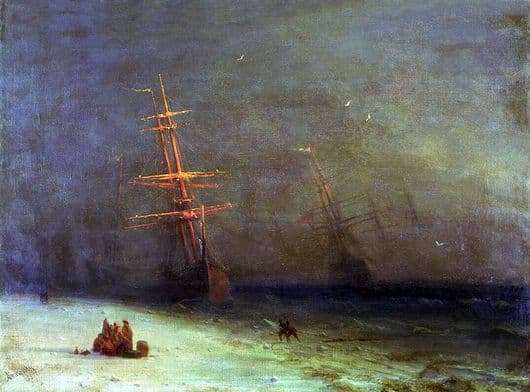 Ivan Aivazovsky – Russian marine painter, of Ukrainian origin. His fate played a cruel joke with him when he set off on a journey through the Gulf of Finland and the Baltic Sea. This event determined his fate. Since then, the sea has become the only source of inspiration and captured the thoughts of the artist.

Aivazovsky was a narrowly focused specialist who painted seascapes, but this did not prevent him from becoming a truly outstanding artist. Today, art historians have more than 6 thousand canvases with various images of the sea, which the artist created throughout his life.

In each artist’s life comes a turning point, when the pictorial manner of performance changes its character for the better. This moment caught Aivazovsky at the age of 50, when he changed his overly contrasting style of writing, to a more restrained one. Then the author was able to demonstrate his true gift: the ability to show the ever-moving water element.

In 1875, Aivazovsky paints a picture with the commonplace name “Storm on the North Sea”. It is especially noteworthy that the strokes of paints in Aivazovsky seemed to have turned into a boundless space with colorful tints. There should be curtains on the sea, but for now we see some brief moments of calm.

A happy family sits on the shore and waits while they are served the boat to the shore. Around there are a large number of suitcases, apparently they are waiting for a long journey through the vast expanses of the ocean. A pleasant impression is created by the “air” of the canvas – a greenish-gray fog covered the whole sky, which even the moon is not visible. Only seagulls whirl above the earth in silence of silence.

Only the sea speaks to the viewer, it rolls on, eating a good part of the coast, then goes back to its origins. The painting by Ivan Aivazovsky was painted in 1875. The product is made in oil on canvas. Today the work is in the National Gallery of Armenia, Yerevan.