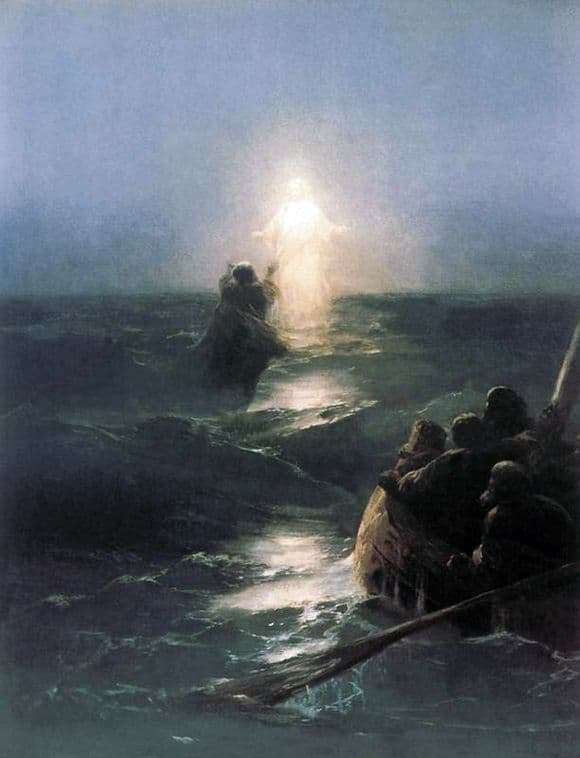 The picture was painted in 1888 in Naples (Italy), currently in the St. Petersburg State Museum of the History of Religion.

Materials to create were paper and oil. Appeal to the biblical images runs like a red thread through all the works of Aivazovsky, a deep religiosity inherent in paintings devoted to events and personalities of the New Testament.

The composition of the work can be attributed to the academic style, as used direct perspective. The artist pays special attention to the plot, which indicates that it is important for him to wake up in the viewer a response, reflections. The painting depicts the main figure – Jesus Christ, accompanied by a group of apostles.

Moreover, we practically do not see the faces of the apostles, while Jesus is facing us. Jesus seemed to rise above them, the eyes of each of them were fixed on him. There is a sense of presence, as if we, too, are sitting in this boat, and a wonderful phenomenon appears before us.

Thanks to the play of light and shadow, the picture acquires volume and depth. Not only is the figure of Christ shining, but also the path along which he is heading towards people, the figures of people are dark. Naturally, such a clear contrast also serves to further emphasize the holiness of the main character in the painting. Aivazovsky skillfully uses the language of painting to say what he wants, to convey to the viewer the idea, to talk with him, without saying a word.

What is the idea of “Walking on the Waters”? Probably, in order to better understand it, you should refer to the biblical story. According to him, Jesus appeared to the apostles, floating in a boat in a great storm. Then the apostle Peter asked Jesus to make him capable of walking on water. And until doubt and fear awakened in the apostle, he walked on. This suggests that the power of faith is enormous and saving, that with faith the storms and dangers are not terrible, that God helps those who truly believe in it.