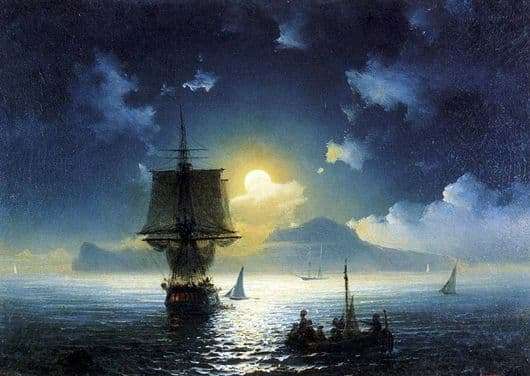 The picture of the famous Odessa artist Aivazovsky has long occupied its place in the Tretyakov Gallery. During his life, he managed to visit all the major maritime cities that fascinated him and were sealed on canvas. To increase the level of skill, the artist traveled to Rome, Germany, Switzerland and other cities.

In each of them he met and examined museums and galleries in search of a new perfect style.

The artist was known as a marine painter – his best works were devoted to the storming sea, which had the power to attract the eye, and made me feel the full force of natural phenomena. The calm surface was also sweet to Aivazovsky’s heart, there are more than a dozen paintings in which water has a lyrical and calm brilliance.

On the canvas “Moonlight Night on Capri” depicts a night view, where all the lines are smooth and delicate. The moonlit path illuminates the night promenade of captains and sailors, creating coziness and evoking memories of the earth, the house, and relatives and friends. In the composition, the central figure is the entire space that fills the water and the sky, the ships and boats are only an addition to the romantic image. The whole picture is drawn with a flick of the wrist, no heavy lines. Clouds seem to float in the air, dispersed by the wind, which, although not drawn, but can be seen in light features.

A dazzling moon makes its way through them, which gently illuminates the sea, offering rest and peace to the tired sailor. Swell waves sway.

All colors harmoniously intertwined, without giving a resonance. A feature of the picture can be considered its multi-story.

Looking at her, you can think of a lot of stories, how and why there were ships here. On the big schooner the lights play. Perhaps there is a holiday and fun in honor of the imminent arrival home. There are a lot of people in a small boat. Who are they: robbers or crashed?