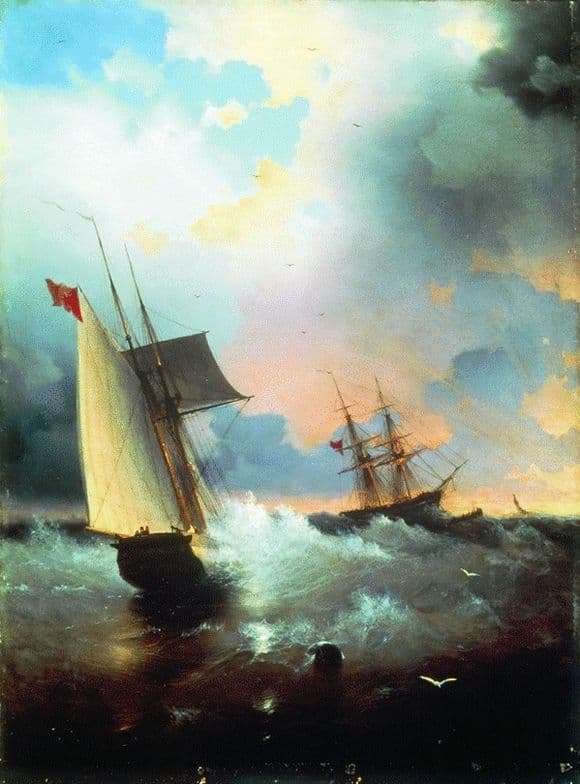 Ivan Aivazovsky’s painting “Sailboats” has absorbed all the most favorite tricks, techniques and plots of an outstanding marine painter. Here you can see the sea, the sky, covered with dark heavy clouds and light cirrus clouds warmed by the sun, and sailing ships soaring confidently on the crests of still restless waves.

The sea in the foreground is almost black in color, which underlines the power and danger of the elements, but towards the center of the picture, the wave is still gathering weak sunlight and is about to throw the ship towards its penetrating sun on its strong foamy palms. He is not visible in the picture, but the entire canvas is already charged with his energy and strength, the ship fearlessly confronts the dying storm, and the calm poses of the people at the stern underline their confident union with a reliable vessel and nature.

Aivazovsky paints most of his works, but the technique of depicting the sea depths and clouds was brought by the artist to such perfection, lightness and transparency, that they seemed watercolor to many at first glance. The master always worked easily and quickly, in one session he could complete the picture completely. Even at the age of 80, working on a huge canvas “Among the Waves”, which area was more than 12 square meters, Aivazovsy finished it in ten days.

Realism, accuracy of the transfer of all the nuances and stormy elements, and light swell on the lunar path, and the foamy laces of a falling wave amazed even the most eminent painters who had a chance to familiarize themselves with his work during his life. The famous British watercolorist William Turner, seeing several paintings, wrote him an enthusiastic and touching poem in which he sincerely praised the skill of the Russian marine painter, and at the end attributed apologies that he took the picture as reality, so fascinated by it and the power of inspirational artist of genius.