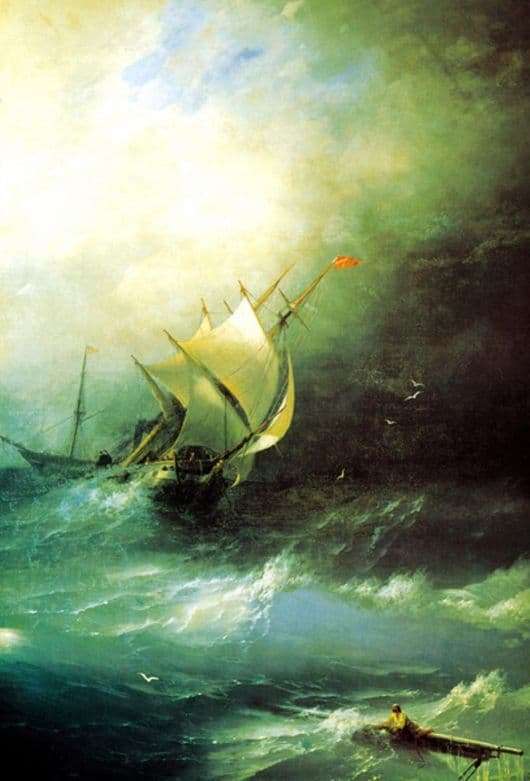 Not everyone probably knows that this picture has a peculiar antonym – “Foggy Morning in Italy”, written in 1864. The artist liked to compare these canvases in his conversation, contrasting the two sides of the world, two radically different landscapes: the peaceful, idyllic, on the one hand, and the terrible, raging, on the other.

Aivazovsky in “A Bore on the Ice Ocean” to give the landscape a greater realism changes the usual color scheme: instead of a blue color, the sea begins to cast a dark emerald shade. He is echoed by the lead color of the sky, which, as is often the case in the paintings of Aivazovsky, is practically merged with the water surface. It seems that even a little bit – and feel the cold breath of the Arctic Ocean! And what a contrast looks like a warm sea in Italy, colored by the tender pink sun!

Separately, let’s say about the plot of the picture. It depicts not only the raging sea (a popular theme in general, which the 17th century Dutch artists managed to turn to), but also the salvation of man. This is quite a rare case in the history of painting, because before that artists, depicting a shipwreck, sought to focus on the horrific consequences of a disaster: the wreck of a ship, disfigured corpses.

Aivazovsky was one of the first to portray the struggle of man with the water element, thereby greatly expanding the thematic arsenal of marine painters. All further works of the artist, one way or another, will seek to solve the problem posed – of course, in favor of the fearless person in the boat. And already in “A Bore on the Arctic Ocean,” the artist, despite his desire to endure a picture in terrible tones a la “The Ninth Wave”, gives the daredevil hope for salvation in the form of sun rays, starting to peek through heavy clouds.