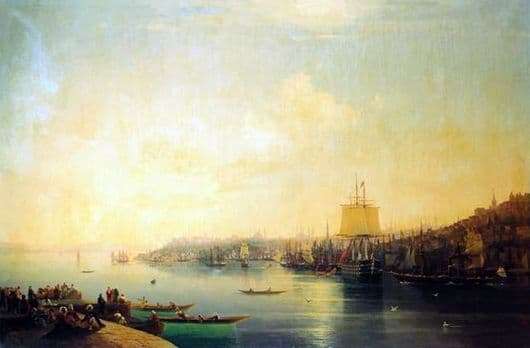 On the canvas, everything came together in a single space. Here the shores are inhabited by people, and the calm sea and the horizon and the sky… Everything is somehow quiet and serene. Meanwhile, this is the Turkish coast, it is not very calm. But it’s not that. It’s amazing how a painter subtly understands the matter of nature.

The sky is white blue before sunset, the sea is dark blue, sometimes turning even in nacre green. And all this is like in the haze of the setting sun. On the right bank, we can not see the minarets and even the houses seem small and insignificant. But the sky is colossally beautiful. On the left bank you can see how residents of Constantinople rest or trade. Everything is quiet and serene, Constantinople on this canvas is a simple quiet metropolitan city, with its own rules, which are unshakable and eternal. At least, it was once thought. And how many battles have passed here on earth, on water! How many lives are ruined. This land and this water remember a lot. And the Crusaders, and Russian, and the British… all happened.

But now everything is calm. Surprisingly how truthfully and effectively could Aivazovsky convey the color of the sea. Sometimes it sometimes seems that it is moving, splashing and that boats are crossing this channel, swinging through the waves. This led and enthralls many. And the artist himself was so in love with the sea that on the canvas he depicted mostly only him. Sometimes it seems that the artist drawing the sea gave the human element human character traits. The waves seem so alive, so beautiful and lovingly drawn every moment. Although Aivazovsky was not a bad portraitist, he also portrayed landscapes of land, but he gave more preference, of course, to sea expanses.