Home ⇒ 🎨Aivazovsky Ivan ⇒ Description of the painting by Ivan Aivazovsky “View of the seashore in the vicinity of St. Petersburg” 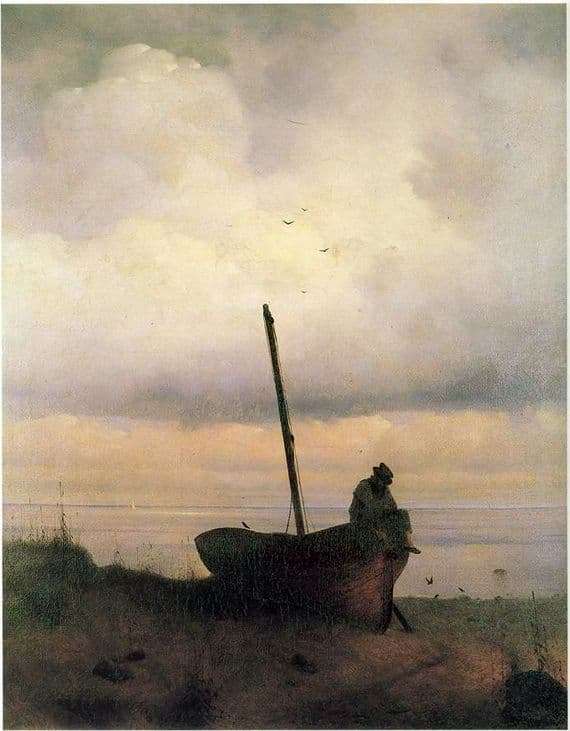 Aivazovsky – the most famous of Russian marine painters. Almost all his life he wrote only the sea – seascapes and sea battles.

“View of the seaside in the vicinity of St. Petersburg” – one of the not quite typical of his paintings. The sea on it is not the main character, as usual – on the contrary, it lies lazy and bright, under a blanket from the sky, and it is not so easy to draw a line between one and the other. It is splashing along the surf on the uncool coast, light waves are running along it, and somewhere far away, on the very horizon, you can see a dash of sail – the ship hurries to other countries.

In the first picture of the boat. Old, resting on the shore, she gives the impression of sad and dead. She stands, plunged into the sand, like in water, there is no sail, a support keeps her from falling to the side. It is slightly tilted on its side, and it is clear that it is no longer possible to go to sea on it.

There will be no more wind to catch, there will be no waves under the keel and fish beating in the nets. The boat is either too old for sailing, or it has broken on this shore – in any case, it is no longer a boat, but rather just a piece of wood, slowly cracking in the sand.

A man sits on the bow of the boat – he bears, dressed in simple and good-quality clothes. The hat is lowered over the eyes, the head is lowered, the back is arched. He looks like a boat – the same rickety and sad. Perhaps his story is similar. perhaps he is a fisherman whose boat was wrecked and who now has nothing to catch fish with. Perhaps a former sailor, too old to even once again go to sea. In the pose of his deaf longing and hopelessness. No more wind blowing the face, no violent sun and raging storms.

He is like a boat – it cracks and he slowly dies. Both are from the absence of the sea in their lives, which alone makes sense of everything.