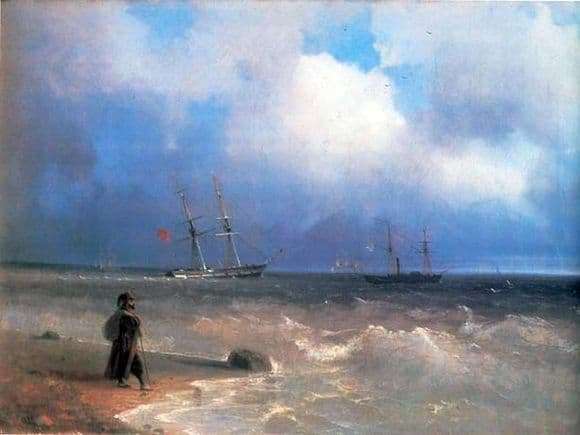 Perhaps no one, as Ivan Konstantinovich Aivazovsky did not confess his love for the sea.

The painter was born in Feodosia and from an early age absorbed the noise of coastal waves, the play of colors, the restless nature of the sea element. In his paintings, the sea is always the main character. It lives, breathes, is angry, plays or sleeps peacefully.

Each picture is a hymn to the sea, a reflection of yet another facet of marine greatness. People, ships, lighthouses are small details, used only to emphasize the special power and globality of the sea space.

The painting “Sea Coast” is one of the first masterpieces of the great Master. It was written in 1840, when young Aivazovsky was sent to the Crimea for independent work. The still inexperienced painter was able to unusually talentedly convey not only the view of the vast expanse of water, but also the whole atmosphere of anxiety of the pre-storm coast.

The sea is not yet formidable, it still does not uplift water mounds, like mountain peaks, still bright waves near the coast are deceptively playful and filled with sun rays. But purple clouds are already anxiously approaching, closing innocuous, white clouds, the seagulls are already too low and seagulls soar close to the shore, holding together, the horizon is already too black. And the ships are already at sea, so as not to break on the coastal stones.

Among this oppressive alarm clearly stands out the figure of a wanderer. He is in no hurry to hide from the approaching storm, he does not run home from a hurricane of water, yes, it seems that he does not have a home either. He looks into the distance. What brings him there so? Perhaps there is his homeland, which is not visible, but she is there, and the wanderer knows for sure. Or maybe, on the contrary, it is attracted by unknown, unknown lands, where it is always warm, where people are kind and affable, where there are no beggars and hungry?

The life of a wanderer, most likely, was also turbulent, disturbing, not calm, like this sea. This is probably why he is not afraid of the stormy sky and the gloomy watery expanse. She calls him, attracts, attracts.

You can guess about this for tens and hundreds of years, as people do, standing at the immortal masterpieces of Aivazovsky.