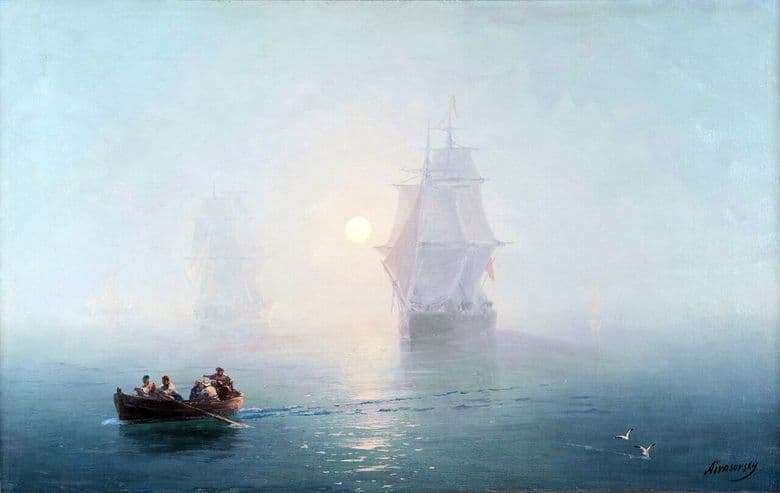 The sea is the element of Aivazovsky. The artist opened her soul to the sea. Aivazovsky did not hesitate to express his thoughts on the canvas; he let go of his imagination when he stood at the easel. On the canvas, he tried to portray what appeared before his inner gaze.

Aivazovsky from childhood tried to draw – at first they were attempts to paint the whole scene on the walls of white houses with coal. After spending all his childhood in the Crimea (the artist was born in Feodosia), he loved the sea from the cradle. Therefore, it is not surprising that he threw out all his love for the water element on the canvas.

Aivazovsky is rightly considered the maestro of tone. While still a young man, studying the canons of schools of European painting, he imposes his own, natural decorative flair on them. Thanks to the resulting unity, the painter Aivazovsky manages to obtain that saturation of the atmosphere, the transmission of light and air, and achieve harmony of color.

In the picture “Warship” we see the image of a calm sea surface, a boat with people who sail towards the coast. The artist managed to convey the tranquility of the picture to his viewer. In the distance we see another ship in the fog.

Painter Aivazovsky wrote all his paintings from memory, making only small sketches using a pencil. In his workshop should always be as quiet as possible. Nothing was to distract the master from work. The great artist said that it is impossible to convey the movement of the elements, drawing it from life. The master must capture the gust of wind, lightning and bursts of waves in his memory.