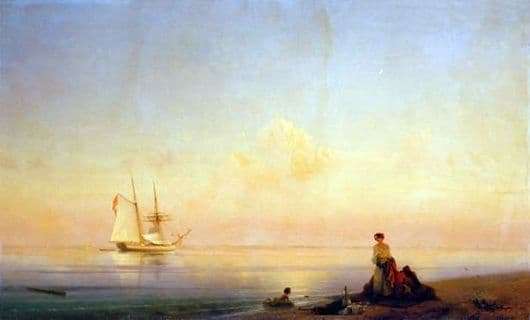 This artist was strongly associated with a great natural phenomenon – the sea. All his canvases are about the sea. Almost all. There are simple landscapes – earthly. But in the world he was recognized long ago precisely as a landscape painter. What kind of sea or ocean he did not depict on the canvases – now in a storm, now in a storm, now in complete calm. He depicted catastrophes, the death of people at sea or after a storm, when the survivors suffer. And no one will understand when the sea can be safe for humans.

The security option offered by the author himself. Here it is on the canvas. The sea is completely calm, and the family is resting on the beach. There is no danger, even a child bathes nearby. But the sea is not the sea, if even on the horizon does not appear at least a boat. And here a little brig flaunts on the canvas. It is already dusk and how good it is to cool off in a warm and even so calm sea.

The artist did not set the task of portraying someone in more detail on the canvas, everything is equally proportional. But still a little bigger place is occupied by the sky. It, like the sea, the calm of sunset, is no longer so blue. How many colors on it at once: both pink, and blue, and white – and all this is reflected in the calm waves of the sea.

Until now, everyone is amazed how Aivazovsky knew how to convey the naturalness of water with paints. If you look at his canvases, it seems that the water is moving or it is poured with all the colors of the rainbow. It feels like water is gushing from the canvas. He never revealed this secret to anyone, he left it with him. Of course, there are still a lot of marine painters, but alas, no, such as Aivazovsky. His work makes many work even better, but no one has yet succeeded in attaining the master level.

Maybe only a little bit, it seems, but still not so lively and not so realistic. Aivazovsky left us a huge number of paintings. There is a museum where only his works are stored, he is in Evpatoria.