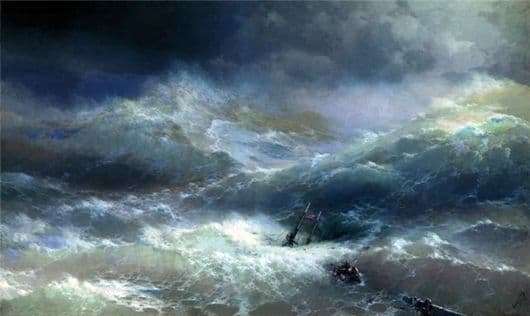 “Among the Waves” is the canvas of the hand of master-marine painter Ivan Konstantinovich Aivazovsky, written by him in 1898, when his creator had already crossed the eighty-year mark. The canvas captures us with its noisy waves. We observe an all-consuming and boundless, azure, ultramarine, steel, turquoise, blue-green, emerald, dazzling white sea. The picture is literally saturated with moisture, freely bubbling and as if going beyond the boundaries of a small space of the canvas.

The author departed from his traditional works, where he portrayed ships during a storm and seascapes. In this picture, he portrayed the main idea of all his work, that only he could masterfully convey only with paints and a brush. For a moment the sea element submitted to the master’s hand and stepped on the picture, forever frozen, not losing its wildness and rebelliousness from it.

This work, written several years before the artist’s death, allows us to survive a whole barrage of strong emotions. It is the quintessence of skill and power of imagination. At first glance, you seem to be penetrating into its epicenter. “Among the waves,” critics call the most perfect creation of Aivazovsky. Every brushstroke seems like a work of art.

This work conveys a heavy anxious mood with its rich blue tones, the waves soar upward, forming a rich snow-white foam, the sea abyss is ready to devour everyone with their power. However, bright aquamarine notes plunge into delight with its purity, it’s like the sun, reflected on the water through the thickness of impassable clouds. If you look closely at the top of the picture, you can see the warm sunbeam. The waves of the artist are not dark and ruthless, they are filled with color and life, they play a rich combination of light and halftones.