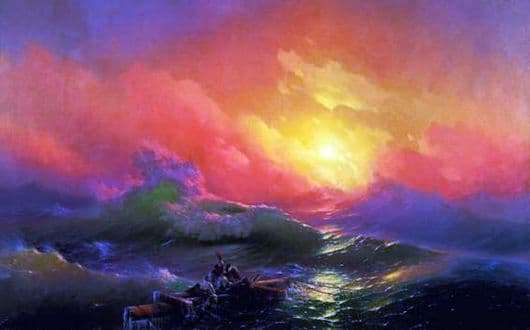 This picture is filled with a storm, in the literal sense of the weather phenomenon, and in the sense of overflowing emotions. It was written in 1850, at that time literally in a short time became a famous masterpiece.

Due to its fame, this picture fell into the palace of Tsar Nicholas I. The well-known collector P. M. Tretyakov did not miss the news about the successes of the young marine painter Aivazovsky, he became interested in his works. Carefully watching the processes of creating paintings, the collector passionately admired the talent of the artist, and insistently demanded that he gave him one of his unmatched paintings.

What is the ninth shaft? This is the strongest of the waves, the highest point of the storm. The picture shows the sea, which has not yet recovered from the storm, but in anticipation of the new, the most powerful and all-consuming. It is dark and boundless, cloudy-blue and not yet received calm. Waves, one by one, beat about the sides of the raft, if you can call it the floating craft, exhausted by the night storm, people. Their faces are almost not visible, but their stooped figures made concessions to nature, their hearts hope that everything will pass and the Almighty will take pity and give them salvation. After all, they still do not know what awaits them further…

Works of this nature are created at the moments when creative growth comes, inspiration comes. This is not the last of the works of Aivazovsky, who so vigorously describes the turbulent state of the sea, but it was this painting that made him world-famous and presented him with a “golden” ticket to the ranks of famous artists.