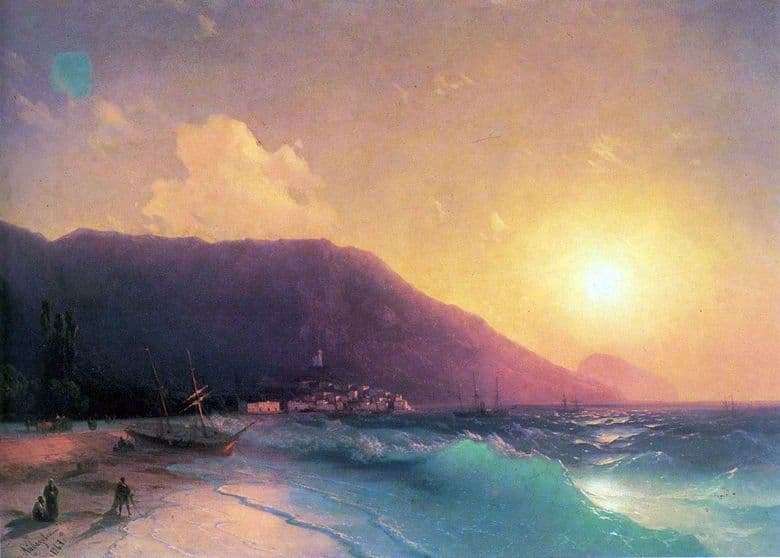 In 1867, when the era of romanticism flourishes, Ivan Konstantinovich Aivazovsky wrote his famous painting “Sea View”. The size of the picture is 61×83 oil on canvas. Thanks to the outstanding talent of the artist’s paintings have the status of national wealth. In his paintings he often depicted the sea, in his paintings it seemed to come alive. The soul of the writer was devoted to the sea. The changeable sea mood is depicted by the author in his works. It is affectionate and gentle, in a tense mysterious calm, changing its brilliance and colors. Changing mood, it is angry, destroying everything in its path. The masterpiece is written in the manner of realism and is dedicated to the artist’s homeland.

The sound of a wave spilled on the shore of a sandy coast is perfectly and accurately transmitted. Looking at the picture, the viewer can see the coastal sand, which appears through the foam of water. People who came to admire the amazing evening sunset. The bright sun sets to the horizon, so that the next morning again to illuminate the shore. The majestic rocks, mighty waves, the artist depicted with incredible accuracy. Soft sand, reflecting the sunset evening. Bright iridescent colors of the sea, from dark blue to light turquoise. The sea of Aivazovsky is special, as if revived, it rolls over the coast with a wave. Ships in the sea like paper, in captivity of the elements, swing in different directions.

Aivazovsky went down in history as a talented painter, whose paintings are exhibited in the most famous galleries of the country. His legacy makes a huge contribution to the development of culture. Pictures of Aivazovsky admire, and his name is praised and revered.