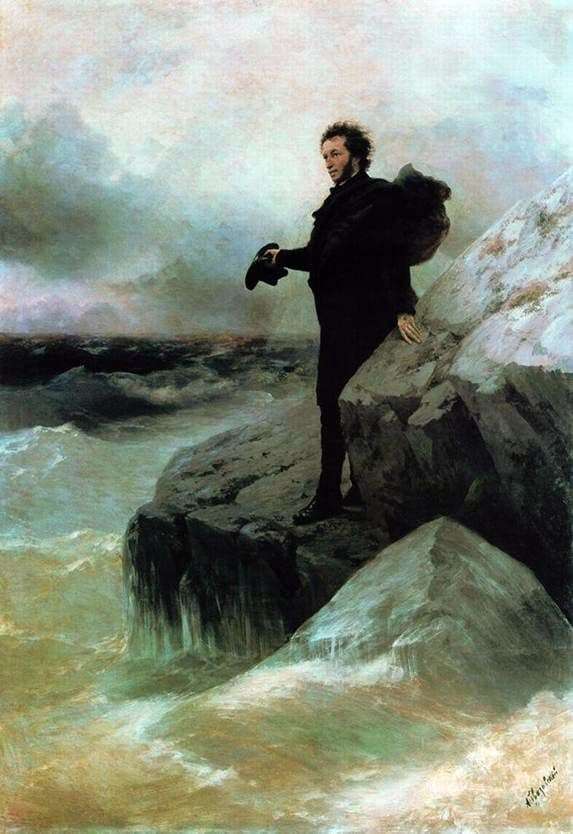 Aivazovsky very often described the sea, it was one of the main topics of his work. The sea is for him one of the main components of life, it is sometimes striking in its calmness, then it shakes with its greatness and strength.

Aivazovsky was personally acquainted with the great Russian poet Alexander Pushkin, who highly honored his paintings. They respected each other’s creative life with great respect. Their first acquaintance took place in 1836 at an art exhibition in the city of St. Petersburg.

Later, Aivazovsky, with the consent of his new creative friend, wrote his portrait. Aivazovsky has a creative cycle “By the Sea”, and he also creates a cycle of paintings dedicated to the elements of the sea. They depict the great poet in various poses: he then lies on the seashore, then stands on the edge of the rocks. The artist depicted the sea raging, dark, rolling on the rocks, the seashore. Terrible clouds float across the sky, rolling in their darkness and malice. In the distance of the sea, water is also striking in its malice, blackness, the sky seems to merge with the sea in the distance, on the horizon. Waves with great force roll on the rocks and break about them.

The poet is located on the very edge of the cliff, at the foot of the sea, in his hands he holds his hat, his hair flying in the wind. Pushkin looks calm, he looks into the distance at the sea, where the waves roll menacingly. More and more terrible clouds are approaching, but this moment does not seem to disturb the poet at all. He says goodbye to the sea, as with an old friend.

It seems that they will never see each other again. Aivazovsky depicted the poet with his mouth slightly open, as if he was reading the sea, dedicated to him poetry, but it responds to him with waves that beat on the rocks. The sea seems to be answering something to its old friend, it does not want to let it go, while at the same time threateningly smashing waves on rocks, expressing its displeasure.