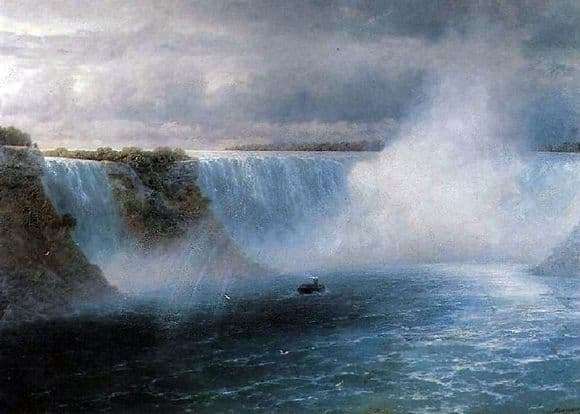 The work of Aivazovsky in the 1890s was particularly fruitful. In the early 90s he made a trip to America, where he exhibited his works. After America, he came to Feodosia, where he created the painting “Niagara Falls” in 1892. The artist admired this waterfall for a long time on an American trip.

The artist brought an album in Feodosia in which he made sketches of Niagara. Based on them, Aivazovsky later creates different versions of Niagara Falls. The artist did his work in kind, despite the fact that he had brought back numerous photographs of the waterfall from America.

Work is imbued with fresh color and a feeling of freshness. There are clouds in the sky, but the landscape is shrouded in light that comes from the best sun. They noticeably embellished the water and the shore. The picture is decorated with a rainbow, which the artist, based on his American sketches, saw over the waterfall. The ease of pictorial manners, matte coating, which allows you to see the structure of the canvas, – Aivazovsky and in this work follows its pictorial principles. Based on his own records in the album, made during the observation of the waterfall, the artist displayed the exact tone and color of the water.

A whole avalanche falls from a cliff. The artist is not intended to focus the viewer on certain details. He paints a picture and builds a composition so that the viewer can perceive the whole landscape at once and not be distracted by the details.

In the painting “Niagara Falls”, there are human figures and a boat, which makes the feeling of grandeur of the image only intensified.