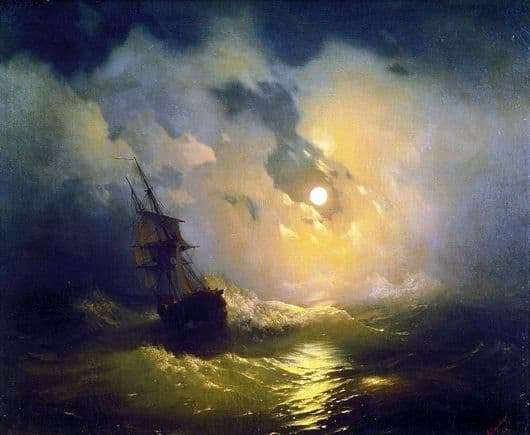 The sea in all its states is the main theme of the paintings of Ivan Konstantinovich Aivazovsky. One of his masterpieces, undoubtedly, is considered the painting “Storm on the Sea at Night”, which was painted by the artist in 1848.

The plot of the picture is quite familiar to the works of Ivan Aivazovsky: night, stormy sea and a lonely ship fighting the raging elements. And only the Moon, which appeared in the lumen of the clouds, observes what is happening with detached indifference. But man will win in this struggle, because after the darkness always comes light.

As with most other paintings by Aivazovsky, the sea does not cause a static sensation. It moves, it boils, it is alive. This is the greatest talent of Ivan Aivazovsky: to convey the whole dynamic of the raging elements with the slightest hues of color, creating a sense of the reality of each wave, each foamy breaker. Moonlight, reflected in the raging water, gives the canvas even more naturalness and emphasizes the incredible dynamics of the sea element. The viewer literally feels the elastic currents of air and the spray of sea waves…

The picture is painted in dark colors, and only in the center, the bright spot of the Moon and the waves illuminated by it, create the illusion of the internal glow of the whole picture. It is the color gamut that conveys the striking symbolism of each element of this canvas. The dark, tilted to one side, ship, shifted somewhat away from the center and being in the shadow, clearly indicates the gravity of the struggle of his team with the elements that are incomparable to human forces.

At the same time, the moonlight in the center of the picture carries the hope of salvation and the belief that the storm is about to end and you just have to withstand its final blows. The use of warm colors by the artist creates even greater confidence in the victory of man over nature.