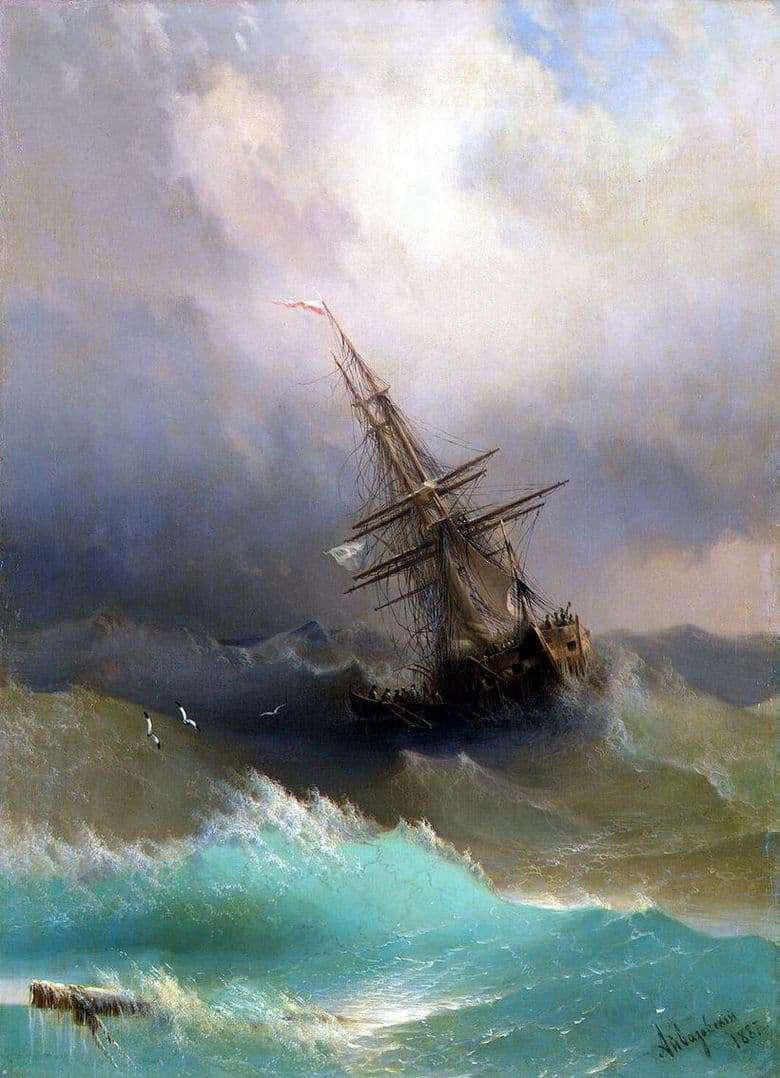 The painting was created in 1887, oil on canvas. On it, the artist demonstrates the greatness of the natural element, which he worshiped all his life. Aivazovsky was in love with the sea and admired all his states: from complete calm to an all-destructive storm. The artist saw the raging sea more than once: both from the shore and from the ship, but he never painted pictures from life, as he considered it impossible to convey the true beauty of nature.

The painting depicts a lonely ship in the middle of a raging element. It is surrounded by large waves and dark sky. The storm has already caused significant damage to the ship: it tilted in one direction, the ropes entangled and hung limply among the masts. Tired of fighting the storm, the ship is already struggling to stay on the water surface, cruel waves surely break its resistance and try to pull it to the bottom. Any next wave can be fatal for him.

People are in a hurry escaping from a sinking ship: they sit down on the boats and row to the side. Will they be able to reach the shore? Will another ship pick them up? Or will they tragically perish in the raging sea? The tragedy of the situation is underlined by the remains of the previously sunken ships, which can be seen in the corner of the canvas.

This picture clearly shows the love of Aivazovsky to the sea. He so diligently painted every wave, brilliantly playing with color. At the very edge of the picture, the waves are light, almost transparent, turquoise in color with white scallops. In the distance, the sea becomes a dirty gray-green shade.

The stormy sea is illuminated by the rays of the sun, which flash through the dark clouds. A bright spot in the sky predicts the end of the storm, gives a chance to rescue sailors. Not far from the sinking ship, white seagulls rush over the waves, symbolizing hope, freedom and life.