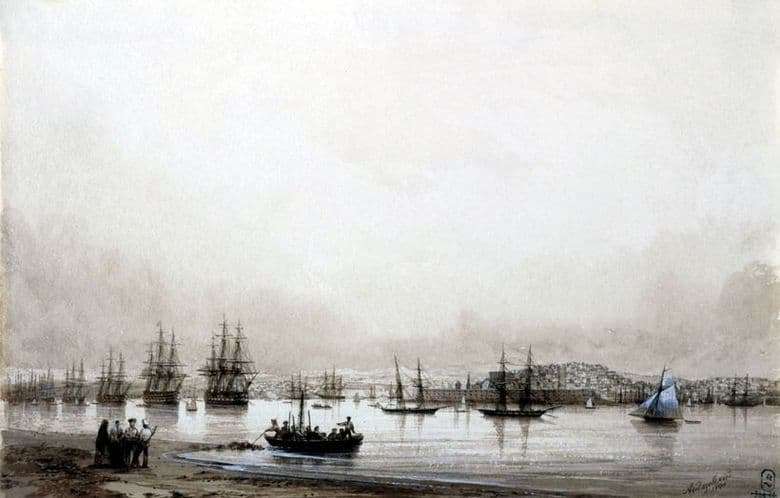 Aivazovsky painted episodes of the protection of the Black Sea and the Crimea peninsula in the Crimean Tatar War. Turkey in the autumn of 1853 decided to declare war on Russia. In March 1854, England and France fought for the Turks. Sevastopol from the north was besieged in September 1854 by the troops of the Turks, the French and the British.

Several times Aivazovsky had to go to Sevastopol to arrange a show of his works in order to talk with the participants of the battles. He had to make all the sketches and sketches for future canvases also during the siege of the city.

The painting “Sevastopol” was painted on paper with the help of whitewash and sepia in 1845. The size of the canvas – 19×30 cm.

In the picture, the artist tries to distribute all groups of compositions harmoniously. All details are worked out in detail. We see in the foreground a small group of people, a boat that sails from the coast, ships standing in the harbor in the bay of Sevastopol. On the other side, we notice how detailed the artist painted the Nikolaev casemate battery, city houses, cathedrals. Due to the way the artist depicted the sky (he made it higher), we can feel how large-scale the composition is, how much space and air there is in it.

Graphics “Sevastopol” formed the basis of his larger-scale paintings “Russian squadron in the Sevastopol raid.”