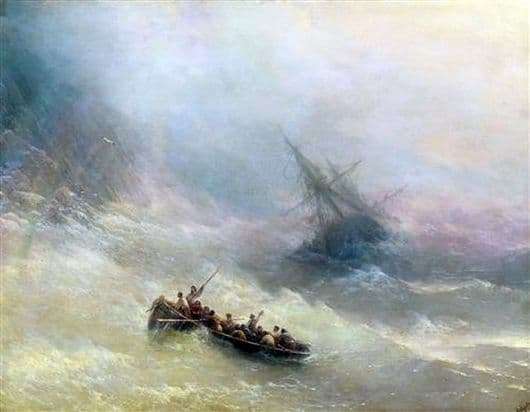 The great Russian marine painter, Aivazovsky, in response to critics’ statements about his already outdated style of creativity in 1873, painted the painting Rainbow, which marked a new period in his work.

It is only at first sight that a wreck of a sailboat on a canvas, characteristic of Aivazovsky, arises before the viewer. But this picture is significantly different from the painter’s masterpieces created earlier. Without abandoning their favorite tricks, the author successfully modernizes them, especially the color of the canvas.

In the center of the canvas is a ship wrecked by rocks. On the boat sailors are leaving, trying to escape. A strong wind splashes out the water and erodes the silhouette of a wrecked ship and coastline. Severe stormy sky almost united with the elements of the ocean.

Bright and juicy color solutions, which the master was so fond of earlier, in this picture have already been replaced by shades more calm, restrained, well developed. Colorful work is distinguished by a special refinement of shades and transitions. And the sunlight, which from above pierces the whole storm chaos, creates a living rainbow, bright, bewitching and tender. She foreshadows a miracle – salvation. The panicked state of the sailors on the boat, turns into a joyful animation. One man gratefully raises his hands to God.

It can be noted that the sensory perception of the picture is generally positive, cheerful. Aivazovsky portrayed the victory of the sailors in a mortal struggle with the elements of nature. And he uses the rainbow as a bright symbol of salvation, the so-called last ray of hope. It can be considered as a biblical symbol of the salvation of all mankind. Despite the obvious romantic orientation, “Rainbow” is already much closer to realism.