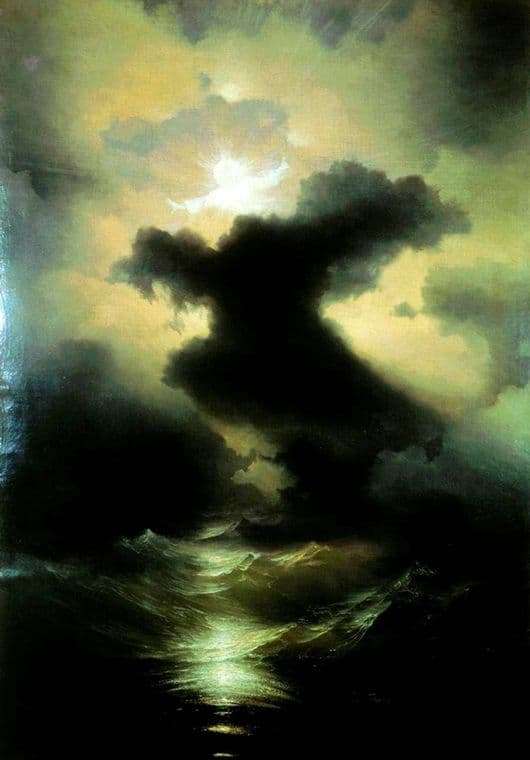 Unlike other paintings, “Chaos. Creation of the World “- not such a famous painting by Ivan Konstantinovich Aivazovsky. But without exaggeration, we can say that it is one of the most impressive works of the artist.

Despite the fact that Aivazovsky undoubtedly refers to marine painters, biblical themes often appear in his works. “Chaos. Creation of the world “- one of these canvases. Naturally, in this work the seascape is taken as a basis. Raging sea and sky in the clouds, typical elements in the works of Aivazovsky. But this is the talent of the master: to present the usual elements with all the artistic expressiveness.

The sea on this canvas plays the role of a supporting actor. In the first place comes the sky, or rather, the dawn sky. It is at that moment when the world is reborn from darkness, in the gap of the clouds, the figure of the Creator appears, illuminated by the rays of the rising sun.

The center of the picture is occupied by a dark thundercloud. It is not necessary to have a rich imagination in order to see in this black mass a figure flying on spread wings to aspire to absorb the nascent Light… But this is already impossible. The path of light has already “cut through” stormy waves, and the divorced hands of the Creator have already begun to smooth them, turning the wild nature into a gentle, calm and kind sea.

The canvas is imbued with symbolism. The transition from the dark tones of the sea depths, symbolizing chaos, to the bright light colors of the sky, as well as some transparency of the dark spot in the center, do not allow the viewer even for a moment to doubt the victory of the forces of Light over the forces of Darkness.

As in other paintings by Aivazovsky, in the painting “Chaos. Creation of the World “shades of seawater and light in the air are incredibly accurately written, which creates the impression of an extraordinary naturalness and reality of what is happening.