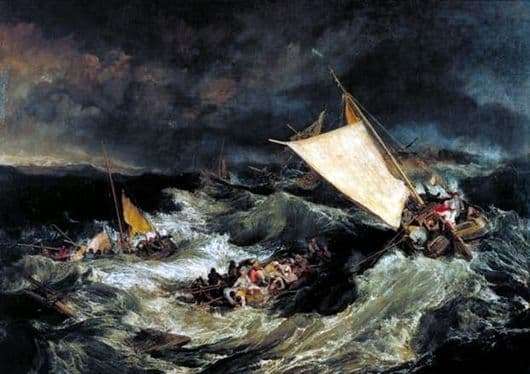 The worst death is on the water and in the air. Neither above nor below you, no one and nothing will save. The only thing is that you will die instantly in the air, you will still suffer for a while in the water. But if misfortune in the sky can happen purely because of the human factor, then here in the sea – nature itself can become the master of destinies. And it’s as if you’re lucky and depends on a lot to live or not to live: from the captain, from neighbors-passengers, from the transience of the storm.

Turner is certainly not Aivazovsky, and it’s so beautiful to convey the sea as our Russian marine marine painter does, he could hardly… But he managed to convey the tragedy, he could convey the taste of death. Pay attention to the fact that almost all the canvas is black – both the sea and the sky. But here the central part is slightly highlighted and we see that somewhere in the depth of the canvas a large ship almost goes to the bottom, and in the foreground are those who managed to get on the boat and two more swam to their rescue. But they risk being sunk. Some people were in the water and trying to pull them out of the water on the boat.

But the top skiff threatened to hang over the boat and it is quite likely that the wave will throw it on the unfortunate, and then all those who were on these two ships will die. The second skiff tries to sail and it seems he succeeds. But as it should be creepy, watch someone dying nearby, but you can’t help. This is scary. And black waves are raging around, ready to cover these little suns and take new sacrifices for the god of water Poseidon.

But the artist still gives some hope to the shipwrecked. Somewhere in the distance a bright streak of light is visible in the sky, which means the bad weather will soon pass, the sea will calm down and you can breathe more freely. But this is not so soon, and people still have time to die. That is scary and insulting, just a little bit to the point of clarity.