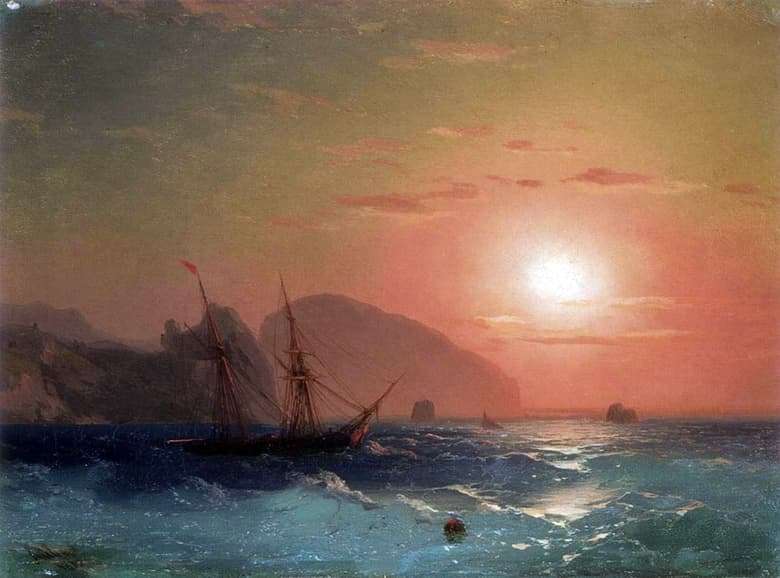 The picture is named in honor of the mountain Ayu-Dag (Bear Mountain) on the southern coast of Crimea, which resembles a bear lying on the belly. Her silhouette is manifested in the predawn haze in the very background, the angle was chosen from the side of the village Gurzuf. Adalary, protruding from the water, can be seen a little closer – small islands “break away” from the once unified shore. Approximately at the same level with them, but to the left, are the ruins of the rocky fortress Dzhenevez-Kaya (Horzuvity), built in the VI. and having several secret passages cut through in the rock, some of which are still available.

In such a significant historical, mysterious and romantic context, the artist depicted a two-masted sailboat, which is about to sail and looking with its nose straight into the distance. A strong headwind flutters his bright red flag and stirs the sea. It is this element that rules in the foreground of the canvas. It to the translucent, crystal and shining bluish-green shade penetrate the slanting rays of the rising sun. But until the light penetrated the shadow of the rocks, the ship still has an inky night lurking.

Dawn colors the sky with dazzling yellow, bright coral and soft peach, which are mixed under the master’s brush and a gradient superimposed on a rapidly lightening sky with an unusual greenish-yellow undertone. Light white clouds run through this tumult of color and joy at the beginning of a new day, promising good weather.

The lines of the mountains and the ship’s masts connect the magnificent color contrasts of the upper and lower parts of the canvas – the cold, restless sea and the warm serene sky – this gives the canvas a special charm. They want to admire, looking down from top to bottom.