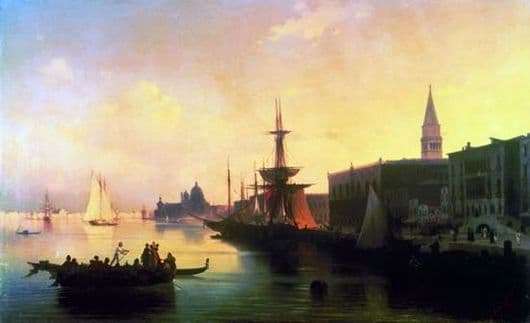 At least 3 paintings by Ivan Aivazovsky are called “Venice”. This canvas was written by the artist in 1842 and is stored today in the Tver Regional Gallery.

Venetian port. Dawn. We do not see the sun disc itself, but a bright light spreads across the sky, coloring it and the clouds with warm pale-pink hues. The same pink-golden rays fall on city buildings and sails, creating an atmosphere of complete enjoyment of the landscape. Although around early morning, the gondoliers are already rolling urban residents, and several boats and ships are already mooring or pushing away from the port. Life on the pavement is in full swing: couples are walking or waiting for a ship, and shopkeepers lay out all their goods. The whole canvas is covered with a small morning mist, and the artist admires with his whole being the beauty and spirituality of the landscape depicted in the painting.

As it should be in the landscape, the main character of the paintings by Aivazovsky is nature. The person is portrayed as secondary, small and insignificant in all this grand scale of the life around him. Majestic and multifaceted, it makes admire yourself, which is felt in the paintings of this artist.

The trip made by Aivazovsky in the early forties to Venice greatly influenced his work. Only while in the city, he had already painted five magnificent canvases, then organizing several exhibitions in which there was no such person who would not admire the ability of the author of the paintings to depict nature and all its elements in one picture so realistic and touching. Throughout his subsequent life, Aivazovsky painted a lot of seascapes, which, one way or another, see memories of this wonderful city, which is not surprising: being in Venice, he had to marvel at the beauty of nature every day and see some of the world’s best paintings in museums.