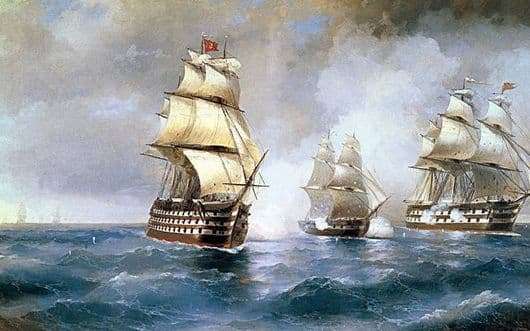 The famous Russian marine painter Ivan Konstantinovich Aivazovsky is the author of a number of canvases in which the main characters are huge and majestic sailboats, a lot of sea and endless sky. The painting “Brig” Mercury “, attacked by two Turkish ships, was painted by the artist in 1892, many years after the events depicted in the painting.

The foreground of the canvas is filled with foaming sea, the waves are not big enough to talk about the storm, but not too small for calm. In the center of the picture is a large Russian sailing vessel called “Mercury”. In 1829, the “Mercury”, which had 18 guns at its disposal and a small team, left the port to patrol the Bosphorus Strait. Since the wind was weak, the ship moved extremely slowly and was noticed by two high-speed Turkish ships, on board who had at least 200 guns and a large amount of manpower in case of boarding. The scene of the capture of the Russian ship in the trap and the exchange of the first shots and captured in his picture the artist.

Two Turkish ships prepared for an easy victory, which the position of a Russian vessel, stuck and sandwiched between them, promises them. The white sails of the ships, cannon shots, agitated sea, suddenly thick clouds, through which the blue sky peers through – all this gives the picture an inexplicable color, peculiar exclusively to Aivazovsky’s canvases. On that day, May 14, 1829, the Russian ship won the battle, alternately sinking the enemy’s ships and losing only 4 crew members, but critics say that the position of the ship, invented by the artist, cannot be true, since winning a battle in it is almost impossible.