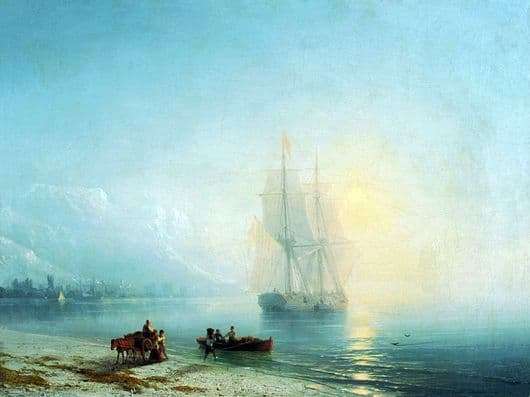 Aivazovsky, at the peak of his artistic activity, was able to create one of his most beautiful paintings, entitled “The Tranquil Sea”.

Naturally, all the artist’s paintings are united exclusively by the marine theme, but at the same time, this picture differs significantly from similar works of the author, precisely in that it has a certain spiritual maturity and emotional balance, despite the fact that the period of painting the picture comes at the time of rethinking his life.

It’s no secret that the marine painter depicted the natural beauty of the sea, which is why this painting was done on the seashore. The picture is painted in oil and has a somewhat unusual color palette. Despite the fact that the colors chosen are exactly those that the master constantly uses, the landscape itself is somewhat unusual.

The picture beautifully shows an amazing play of light, together with the gentle play of sea water. Thanks to a unique technique, thanks to which the master managed to scatter the light across the water, he easily and unobtrusively translates the viewer’s view of the ship, which stands not far from the coast.

In the event that the artist did not add to the overall picture of this yellowish tint coming from the sun, then most likely the ship would become mainly on the canvas, but thanks to this the master managed to give the canvas a completely different image.

Thus, it is not the ship that becomes the basis of the picture, but the entire sea surface, and the ship acts as an addition, an integral part, so to speak. The picture is capable of evoking extremely bright emotions in the viewer, the title itself plays no small role in this. And the bustling people who are nearby, perfectly balance the calm sea. The master perfectly emphasized what needs to be highlighted and blurred what is secondary.