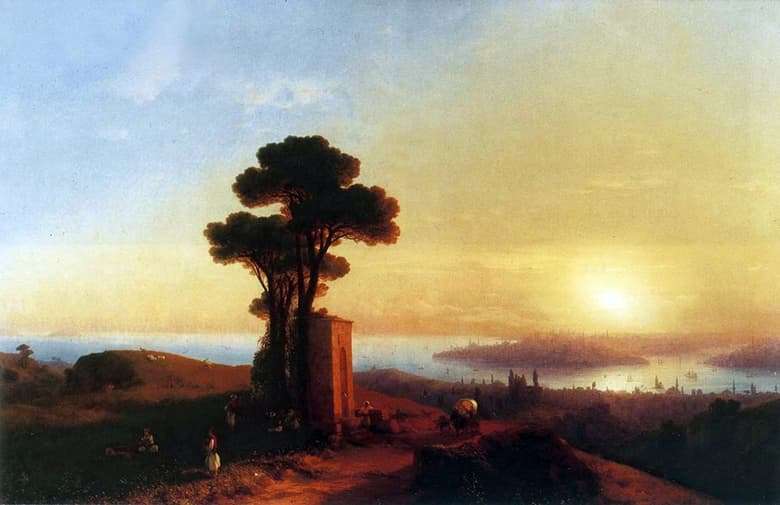 This is one of several paintings depicting the ancient capital from different angles and with varying lighting, written by an outstanding marine painter after traveling through Turkey and Greece in the 40s. XVIII century., Which made not a strong impression. Many of the works dedicated to this city are considered world-famous masterpieces.

Masters of romanticism in painting, such as rich colors, accented transfer of light and shade, deeply expressed spatial composition, “admiring” the perspective and quite free choice of plot, are traced in the canvas of the master.

Judging by the sky, the sultry late-night hours, when the breeze does not bring the long-awaited coolness, descend on the Turkish land, and it is better not to leave the saving shadow of tall trees, which most foreground characters do. The Turks are dressed in traditional clothes that stand out against a darker background with spots of white wide trousers and red vests. In a cart with a light roof, the peasant and his friends probably return after a successful trading day, or the travelers leave the capital for a short distance. The road on which they are driving, leads the eye to the panorama of Istanbul, which lies at the bottom of the city, rushing upwards with towers, minarets and slender cypresses.

The whole canvas is saturated with warm shades of yellow and reddish-orange. They are expressively emphasized by the dark, black-brown shadows that lie on the ground – nature prepares for the coming of night. And only a piece of sky in the upper left corner and its reflection in the sea smooth surface carry a cold translucent blue, foreshadowing a new hot day.